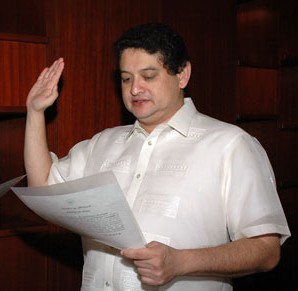 Bukidnon congressman Teofisto “TG” Guingona III obviously has lots of efficient moles in various government, non government and financial agencies. I mean, how else could he have uncovered the fact that the government plans to take out a loan to the tune of P1.6 Billion just to buy fluorescent lamps?

Yes, my jaw dropped, too.

I mean, really, who in their right minds would want to spend that much on mere light bulbs when the economy is in shambles, when millions of Filipino children walk barefoot to school, when the ordinary jeepney driver barely meets his daily boundary because of high gas prices, when the ordinary Filipino family can barely eat healthy food everyday and when we’re all supposed to tighten our belts?

I suppose this is the government’s idea of “saving.” Spend billions first in order to save in the long run. But still — why now? Why this much?

According to TG, the government proposes to acquire a $35 Million (or P1.6 Billion) loan from the Asian Development Bank to purchase 13 million pieces of compact fluorescent lamps (CFL). These lamp bulks will accordingly be distributed to the poor sector of the society and will also be used for the rehabilitation of at least 40 government buildings. The Department of Energy allegedly submitted the proposal and claims that it’s under the government’s so-called energy efficiency project.

My other burning questions are — exactly who will benefit from this project? “Poor sector of society” is just too damn broad. Have the exact recipients been named/identified yet? Which government buildings are these? Don’t these government agencies have specific budgets for this type of purpose? Now if ever this loan gets approved, who and how will the acquisition be monitored?

It’s interesting to note that this staggering amount of money will be used to buy fluorescent lamps. LAMPS, for chrissakes! Things also don’t add up — the electricity rates continue to rise and yet the government thinks there’s a need to buy $35 Million worth of CFLs. That’s odd.

I’d hate to think that this money will again be used for something else. The 2010 elections is just around the corner.