Album review written last August 31, 2007 and published by many media outlets. Thank you!

The author of this piece (who is also the one behind Mindanaoan.com) is a long-time supporter of award winning Filipino band South Border. She was also cited in the album acknowledgments. Jay Durias, a certified Dabawenyo, is South Border’s musical director and keyboardist. Jay’s solo album, “Songs I Grew Up With,” is a project album. 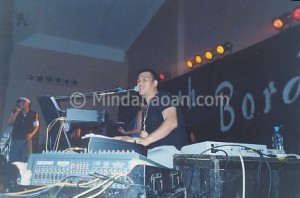 After all, he’s largely considered as “the main man” behind the highly successful band, having composed and arranged most of South Border’s hits including “Rainbow,” “Love Of My Life” and the favorite of many, “Kahit Kailan,” and having sung the well-loved ballad “Habang Atin Ang Gabi.” The silent musical genius behind a lot of hits including “Ikaw Nga” (OST – Mulawin, GMA 7) and “Di Na Nag-iisa” (OST – Darna, GMA 7), you can’t help but think – when will someone like Durias, who has the soulful voice, the boyish charm and the unquestionable talent ever try to do something on his own, away from the image of South Border and just as himself? Because, really, South Border may have had front liners but fans and music critics alike have always recognized and appreciated him and his work. Come to think of it – while it’s difficult to imagine South Border without Jay Durias, it’s not difficult to imagine a Jay Durias without South Border – the man has what it takes to produce phenomenal hits – there’s just not been a chance for him to fully showcase his gift.

Fortunately, that chance is here…NOW.

Durias is finally giving the music world a touch uniquely his own via a solo album dubbed “Songs I Grew Up With” (produced under new label Open Mic Records, distributed by Star Records). And, no, this project should not be misconstrued. The solo project has the full blessings of his band mates and is in no way an indication that he’s leaving the band.

A collection of carefully chosen ditties which have, in one way or another, made quite an impact in Durias’ young life, “Songs I Grew Up With” contains 10 tracks – “Do That To Me One More Time,” “ Light and Shade,” “Him,” “Reward,” “Birthday Song,” “You Can Do Magic,” “My Cherrie Amour,” “Goodnight Girl,” “Sa Hangin” and the carrier single, “I’ll Have To Say I Love You In A Song.” 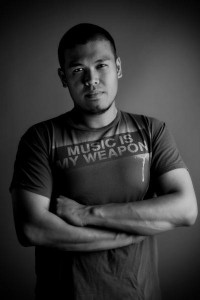 Before you dismiss the album as just another bunch of chopped covers, one must realize that these songs represent memories. Hence, unlike other albums that either try to match the original artists’ high notes or try to focus on the songs’ commercial appeal, the songs in this album are stamped with candor, warmth and individuality. Because Durias sings them honestly and from the heart, the songs become – different. Every song has new details and Durias’ genuine artistry reflects on each.

“Songs I Grew Up With” boasts of a lot of attitude, beautifully re-arranged tunes and solid, powerful vocal varieties. The album can be considered a journey of sorts. From the days when Durias was still feeling his way in the world to the days of pure gratitude, the listener is transported to the happy, sad, upbeat and thankful days of one of Davao City’s pride and joy.

While the entire album generally has a magical feel to it, one should not discount the fact that each and every song has a distinct touch.

The carrier single, “I’ll Have To Say I Love You…,” for instance, is one of the pleasant surprises in the album. Trained and untrained ears alike may probably never know what’s coming, judging by the first few notes of the song. Then, a few seconds later, it becomes a light bulb moment – you can’t but mutter to yourself, “how’d he do that? Now that’s good music.” The carrier single is peppered with spice and everything nice – it embodies an album that you know will underscore Durias’ silent but laudable gift.

“Do That To Me…” is another pleasant surprise in the album. A few seconds into the melody and one will eventually realize that the ditty has evolved into something rich and playful. The beautiful thing about this is that it hasn’t totally veered away from its classic feel that’s reminiscent of sweet love.

“My Cherrie Amour” has a nice twist, too. It has become sexier…more provocative…but with a whiff of tenderness. Listeners will love the easy-on-the-ear vocals and the different take on the melody – it’s as “lovely as a summer’s day!”

Another noteworthy track is “You Can Do Magic,” which can most likely be an easy favorite of many. Durias laced the song with amazing, danceable flavor – almost salsa-like. Who would ever think that the inclusion of doo doo doo’s could make this ditty more interesting? One cannot help but wonder how Durias ever thought of re-interpreting that best-loved standard and even making it into a distinct star of a song on its own.

Let it be emphasized, however, that “Songs I Grew Up With” is not just a showcase of Durias’ arranging skills – although for sure industry experts will agree that the album can and has now set the rules, if not raise the bar, in terms of musical arrangements. Vocals-wise, the album can be considered a treasure trove of sorts.

“Light and Shade” and “Him” highlight Durias’ poignant, intriguing and beautiful voice that can only be compared to artists such as John Legend and Brian McKnight. “Birthday Song” is sexy, sweet and interesting. “Reward,” which is incidentally a praise song, features his heart-wrenching rendition of a love and of a longing. It can easily be a favorite of a lonely soul, who wants to reiterate the promise of redemption and faith. Durias’ vocal prowess is also showcased via the emotional rendition of “Goodnight Girl.” If one listens to it deep into the night, it should not be a surprise if tears come soon. The only original and Filipino song in the album, “Sa Hangin,” is a certified blockbuster hit in the making. It has already gained quite a following, after its initial airplay in several radio stations. “Sa Hangin” is a fitting finale of an album that is sure to not only bring listeners down to memory lane or to a sentimental journey but also to let them take a peek inside Durias’ colorful life.

“Songs I Grew Up With,” with all its artful arrangement, smooth vocal power and meticulous choice of significant tracks, has all the ingredients of hard work, talent, ingenuity and yes, commercial success. The quality of the production is obviously high and loyal fans will have their glorious fill of Durias’ great musicianship. Seasoned musicians and people who have yet to succumb to Durias’ spell will enjoy listening to this album. It’s a tranquil, introspective ride anybody would be happy to take.

Lastly, listeners will cherish this album as it reflects a new creative direction for one of today’s most admired musical geniuses. “Songs I Grew Up With” is a celebration…a reminder that once in a while, someone like Durias comes along, shakes things up in a good way and lets us realize that yes, good music is still very much possible.

Get yourself a copy of “Songs I Grew Up With.” It’s money well spent. It’s a toast you can’t help but raise a glass to.