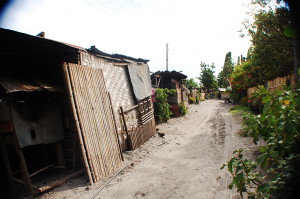 A few months ago, my brother and I went to General Santos City, Mindanao. AFTER 14 LONG YEARS. It was a trip planned within a few days – I wanted to take pictures during the Tuna Festival and at the same time, perhaps see some of our relatives (father’s side) whom we haven’t seen in that long a time. What supposedly was a “reunion” turned out to be a depressing visit.

My brother and I learned that some of our relatives are now homeless. Yes, HOMELESS. Their homes in Lot 2, Barangay Apopong, General Santos City have been demolished and they have been living in makeshift shanties for more than a year now. By makeshift I REALLY mean makeshift – they merely took whatever they could retrieve in the heat of the demolitions (there were two in a span of a few months) and they literally just pieced all of those items together just so they can have “roofs” over their heads.

And makeshift shanties also mean that all of the homeless families (there were around 200 of them that lost their homes), together with our relatives, do not have comfort rooms of their own.

You could just imagine my relatives’ predicament every single day!

I was also told that water was only available through a few faucets and that water was only made available during very early morning (for 15 measly minutes, mind you!), a few minutes in the afternoon and that was it! I asked where the water came from and I was told that the company that operated as “water supplier” was owned by a local prominent family (I won’t name them here)

So, really, you could just imagine the ordeal they have to go through everyday!

My aunt is a widow and she has four children but because of their situation, two of her children were forced to stay with other relatives in far flung areas. She also lost her job. My uncle, on the other hand, works as a carpenter for a fish carrier and has to go to work everyday. You could just imagine how difficult it must be to leave “home” every single day and then come “home” to that type of scenario.

I asked my relatives if they tried approaching the local government officials. My aunt said that they merely relied on their association’s officials’ word. They were allegedly even encouraged to vote for Manny “Pacman” Pacquiao during the last election because Manny would supposedly buy the lot where their homes stood before and would just donate it to their now homeless group. I felt sorry for my relatives and for the other squatters who actually fell for that type of crap.

I also learned that a baby has already died while staying in one of the makeshift shanties. I couldn’t help but ask myself exactly how many should die before these people get decent shelter, which, by the way, is one of the basic needs of man. WHERE’S THE GOVERNMENT IN ALL THESE?

Meanwhile, my aunt shared something with me in the course of our conversation — that General Santos City Mayor Pedro Acharon was actually our distant relative! Apparently, the mayor’s mother is related to my lola’s side (Busgano) so that makes us..what…2nd degree cousins? Anyway, I could sense that my aunt was very hopeful that one day the mayor would help them somehow…she just didn’t know when and how.

Before my brother and I left GenSan, I contacted Rep. Darlene Antonino-Custodio’s local staff and asked for a brief meeting with the solon. I once worked as a media officer in Manila and my job entailed me to interact with solons – including Ma’am Darlene. In fact, the last time Ma’am Darlene and I “worked” together was in Cebu during a national conference. Anyways, going back to my request for a meeting…let’s just say nothing came out of it.

I also tried to contact Mayor Acharon but since the Tuna Festival was still ongoing at that time, I could barely contact anybody who’s the least bit interested to cut their “break” short just to listen to a person who has homeless relatives. Sadly.

Ever since my family learned about my relatives’ problem, we’ve been doing our best to help. Still, we can only do so much.

So here’s the one question I want to ask General Santos City, Mindanao Mayor Jun Acharon:

“Will my homeless relatives have roofs over the heads soon and experience the real meaning of Christmas?”

“Is the General Santos City government doing anything about the plight of my homeless relatives as well as the plight of the other homeless people in Lot 2, Barangay Apopong, GenSan?”

I can’t help but ask the second question because it’s been more than a year and my relatives still do not have decent shelter.

Before I forget, the people there did tell me that they were offered a relocation site. In fact, their signatures, biodatas and other pertinent personal information were collated so that the “papers” can be fixed. Unfortunately, several months have passed and the people now fear that the plans to relocate them have fizzled out.

I feel the irony whenever I read news stories about GenSan’s so-called Enchanted Christmas when the real people who need help and who absolutely need to feel the spirit of the holidays do not even have roofs over their heads.

It is my fervent hope that the General Santos City government does something about the problem in Lot 2, Barangay Apopong, General Santos City. I’m even willing to travel to GSC to personally discuss this matter to the mayor who must address this problem ASAP. I won’t even tell him we’re related.

p.s. my uncle, who also used to live in that area of Brgy. Apopong, DIED about two weeks ago. He died seeing his brother and sister homeless. He died without seeing them have a more settled life.