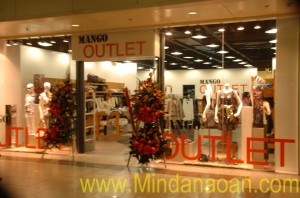 I must admit, I used to be a very strict cheapskate. I have a penchant for saving money (which is a good thing, I should say) but during the past few years, I’ve slowly realized that treating myself to something nice and pretty and a little bit expensive isn’t always a bad thing.

One of the things I’ve recently liked to splurge on are quality clothes – from shirts to cardigans to pretty tops to cargo pants to capris. I also like to buy clothes that I can wear during business meetings but at the same time can still pass off as a nice day-to-evening outfit. And one of the brands I like is Mango.

Mango is a Spanish clothing company based in Barcelona. It’s the brand being endorsed by actress Penelope Cruz. I first had the chance to buy an item in one of the MNG by Mango stores in Manila a few years ago and since then, I became a fan. I like their tops, cardigans, sweaters and shirts. Actually, roughly three weeks ago during my Cebu City trip, I was lucky to chance on a whopping seventy percent (70%) sale in Mango Ayala Center Mall Cebu (I later learned that there was also a similar sale in Mango SM Cebu North Wing when I visited the next day). Of course, I took that opportunity to buy a couple of items and my favorite purchase was this green MNG suit.

Mango has more than 850 stores in 81 countries and here in Mindanao, Philippines, there’s a Mango store in Davao City. Recently, I got word that there will be a Mango Outlet opening soon in Lim Ket Kai Mall, Cagayan de Oro City, Mindanao. And since I was off to CDO for a business meeting, I reminded myself that I just had to visit the Cagayan de Oro City Mango Outlet branch by hook or by crook.

And visit I did! Check out the photo I took of the store’s facade. I think they opened about a day or two before my visit so there were still flower arrangements outside the store.

I’m no expert so the following will just be statements coming from a customer who has bought from other Mango stores — It was obvious that the Mango Outlet in Limketkai Mall CDO was still undergoing “birth pains.” I thought that they could need the services of a visual designer ASAP and the clothes could have been arranged more properly throughout the store. I also thought that they lacked place cards – you know…those little signs that’ll tell you that these were on sale or that these were priced between this much and that much.

I also got a bit confused with how the clothes were displayed. There were casual tops mixed with “evening” tops, there were tops here but there were also tops of a similar style over there. So my guess was that some of the customers who earlier visited the store “misplaced” some of the items. I hope I was right.

As for the staff members – I only noticed two, both of whom were very busy checking boxes at the back of the store. I thought that was odd as I somehow expected they would be busy greeting customers at the door. Oh well.

Anyways, back to the clothes…I wasn’t able to buy a single item during my first visit. Which was sad, really. I have two excuses: one – I spotted two or three pieces that already had loose tailoring and two – there was this woman who came in with her friends and nonchalantly declared that the items there were “already out of style.” I guess she meant that the clothes there were from last season or something. To which I wanted to retort “it’s a Mango outlet and most of the tags indicate that the prices have been slashed down, what’s your problem?” but then again I wasn’t too sure if my impression was correct.

So paging the Philippine representative of Mango or MNG or MNG by Mango – hope you can clarify this. Are the clothes being sold in a Mango Outlet really cheaper compared to those sold in Mango or MNG stores? Are these overruns or something? Please feel free to CONTACT MINDANAOAN also if you have a press release about your new CDO store.

Anyways…these are just my first impressions and as we always say about impressions…they change. Hopefully, things will be better at the Mango Outlet Limketkai Mall soon (I’m sure they will be!). I look forward to coming back and buying lots of stuff! And of course, you can be sure that I’ll write about it with much gusto.