Can you still remember that mixed feeling of anticipation, eagerness and curiosity — much like the feeling you had on your very first day in school? That was exactly how I felt when I attended a recent bloggers networking event in Cagayan de Oro City, Mindanao. Although it wasn’t my first time to attend one, I still felt like a bright-eyed girl who was so excited to learn new things, to know more updates on the goings-on in the blogosphere and to meet new people in a new town – all of whom I felt shared my love and belief on the power and beauty of the Internet and blogging. Plus I was able to invite 6 friends from Bukidnon and all of my 3 brothers! HOW COOL WAS THAT? 🙂

Mindanaoan attended the 1st Digital Filipino Club and Cagayan de Oro Bloggers Meet-up last July 17, 2009. Generously hosted by Digital Filipino Club member Syntactics, the event saw the participation of roughly 75 bloggers, IT industry players and media practitioners from Cagayan de Oro City and Bukidnon. Of course, the CDO Bloggers were there! (yey, represent! :D) It was drizzling that night but that didn’t stop the netizens from attending. 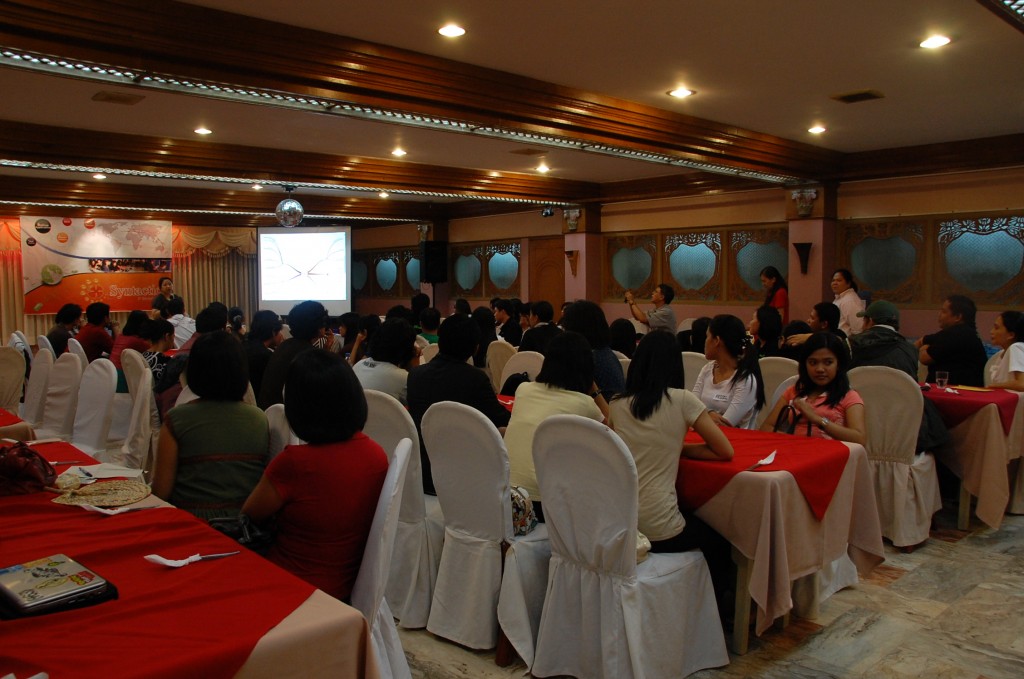 Participants paying attention…see that HP netbook on the bottom left with tons of stickers? That’s mine! 🙂

One of my brothers, Nathaniel, and I have actually attended a similar networking event last year in our hometown Davao City (which was also organized by Digital Filipino and sponsored by PAGCOR Davao) We’re a bit excited with this CDO leg, though, since it’s a relatively new, fresh group plus there were stakeholders present during the event. 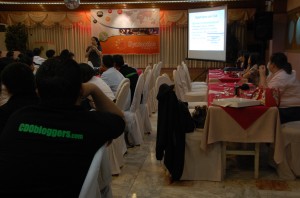 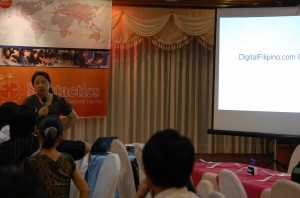 The event that night kicked off with Syntactics CEO Stephanie Caragos welcoming all of us:

And then each and every participant had the chance to introduce himself/herself. We were also made to talk about what we do and about our blogs. My brother, who runs a popular tennis blog (it’s only a few months old but damn, it attracts so much daily traffic! His Tennis Guru blog also got cited in a CNN Sports Illustrated article), made quite an impression (he was then called “the tennis guy” all night long). I didn’t do bad, either…I think 😀 I shamelessly plugged Mindanaoan! (which is still less than a year old, truth be told) My two other brothers were able to catch up a few minutes later, thankfully. My videographer brother Ben and my photographer brother Bon also invited the participants to drop by the Kasalan sa Kagay-an 2009 event.

Janette Toral of Digital Filipino (yes, THE Janette Toral…the very same person who founded the Philippine Internet Commerce Society and who helped lobby for the passage of the E-Commerce Law) then gave an update on the Top 10 Emerging Influential Blogs of 2009 (deadline is on July 30, 2009!) as well as on the Digital Filipino Web Awards 2009.

What I liked about Janette’s presentation was the clear diversity of blogs and niches that have gained ground in recent years. Blogs these days are no longer just personal online diaries. They’re now more informative. Blogs nowadays are more colorful, more “well-prepared”…blog entries are no longer just posted for posting sake, kumbaga. Bloggers are now keener of what their readers like and want. Bloggers now take “better” photos, they do research and really go out of their way to write something that’s really worth reading.

Janette then introduced one of the winners of the 2007 Emerging Influential Blogs awards – Aileen Apolo. Aileen lang naman is the country consultant of Google (can you say WOW?) Now I have a little confession to make — I’ve been an avid reader of her blog since 2005/2006. I remember feeling happy when Miguel (her son) won something or sad when she felt lonely and confused. And then when I found out that she had Twitter, I immediately “followed” her tweets. I was also very elated when I found out that she finally found Mr. Right! *aah, love*Aileen’s engaged!

After Aileen’s talk, it was Syntactics‘ turn to share their experience. Syntactics has, for two years in a row, bagged prizes at the Digital Filipino Web Awards. Kagay-anons must be so proud to have a company like this in their city!

Syntactics also informed all of us about its advocacy arm – LetIThelp. True to the mission of social enterprises which is “bridging social opportunity into sustainable reality innovatively, effectively and efficiently,” LetIThelp.org helps the local community by selecting deserving fresh graduates in Mindanao and helping them find right opportunities in their chosen fields of profession. Seeing that there are more and more outsourcing job opportunities here in the Philippines, LetIThelp.org aims to help develop a ready pool of trained and experienced IT professionals. They do this by conducting FREE seminars to colleges and universities in Northern Mindanao to further educate the IT graduating students and to prepare them on the tough life outside the classroom. What’s also commendable about LetIThelp.org’s advocacy is that they will focus more on the hiring of underprivileged fresh graduates coming from Mindanao. A Mindanao based company helping Mindanaoans? That deserves two thumbs up!

Dinner was then served then the networking opportunity began!

Cagayan de Oro City, by the way, will play host to the much-awaited Mindanao Bloggers Summit 3 (MBS CDO) on October 24, 2009. Hence, the bloggers event that night did pave the way for bloggers, stakeholders and other supporters to finally meet and exchange ideas. That 1st Digital Filipino and CDO Bloggers Meet-Up sure provided the platform for new connections to be established and for existing ones to be strengthened further! Two thumbs up!

There was a raffle draw that night as well. Two of my brothers won! The Tennis Guru guy got an AyosDito t-shirt (which ultimately went to me because it was a girlie shirt) and my other bro got an AyosDito notebook plus pen (cool!)

By the way, Janette also gave a post-event treat — the first 10 bloggers who attended the event and who’d become a fan of Jupiter Suites’ Facebook Page would get free pouches from Jupiter Suites – a budget hotel in Makati City! Now with all those treats, freebies and amazing networking opportunities, who wouldn’t want to become a blogger and start attending networking events like these, yes?

To Janette, Digital Filipino, Syntactics and to my fellow Mindanao bloggers – thanks for making the event memorable and definitely one for the blogs! 😉