A few hours after the Rock the Vote 2009 Cagayan de Oro leg and after sharing a hearty meal with the members of Team Oro Photo and Video (who generously extended their time and support to the Register and Vote Campaign…thank you, thank you!) as well as the event’s hosts, Maxine Monasterio (Miss Teen Philippines 2007 and a CDO native) and Titus “TJ” Monterde (he’s the son of Tito Monterde, the station manager of Wild FM CDO) — (Max and TJ also host the ABS CBN Northern Mindanao Sunday show, Mag TV Na, Ato Ni!), I caught a CDO – Cebu PAL Express flight.

PAL Express is owned by Philippine Airlines and is geared towards shorter flights.

It was my first time to catch a PAL Express flight. After years of traveling from CDO to Cebu via boats (I’ve tried Trans Asia Shipping Lines, Superferry and – gulp – Sulpicio), I decided that a PAL Express flight was already in order. I simply had no time and energy to endure roughly 11 hours of travel time at sea.

I caught the 9:50 AM Cagayan de Oro – Cebu City PAL Express flight PR 286. I was already at the airport an hour and a half early but I didn’t mind since I brought along my trusty Hewlett Packard 2133 netbook (if you want to check out my jazzed up HP baby, click this) Unfortunately, CDO airport still does not offer free wireless internet so to while away the time, I decided to sift through photos I recently took. The PAL Express staff members were very courteous and even the security guard helped me with my one big Nike gym bag (which hardly contained anything except for a few clothing pieces and my DSLR camera) Thumbs up for helpful staff!

Something embarrassing happened that morning, by the way. My name was called via the PA system because apparently I dropped my boarding pass…and get this…I didn’t even notice! Ayayay…I was probably so zoned out after the many days of preparing for the RV Campaign that I just sipped my coffee, checked my computer files, watched TV…and didn’t even realize that I no longer have my boarding pass and baggage number with me. Good thing someone found it and promptly returned it to the PAL Express counter. Thanks to the PAL Express staff, too!

We boarded the plane on time (9:30 AM) – which, I must admit, is a bit surprising knowing that PAL’s notoriously known for being “late” (hence, the joke “PAL-aging late.” Thank goodness the flight that day was on time.

Here are some photos I took before I boarded my plane: 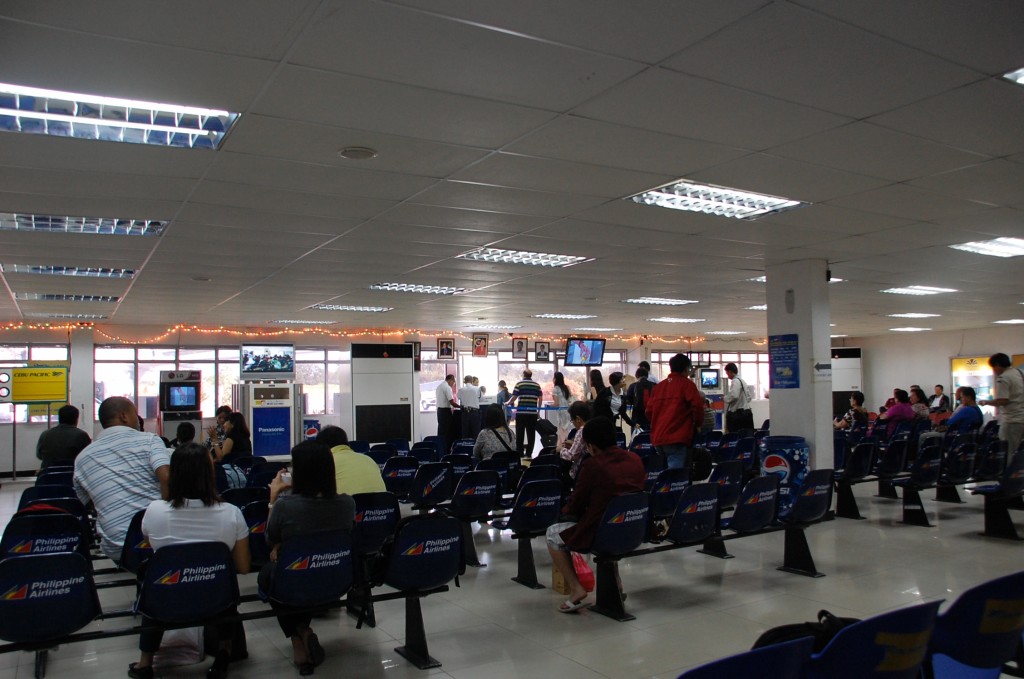 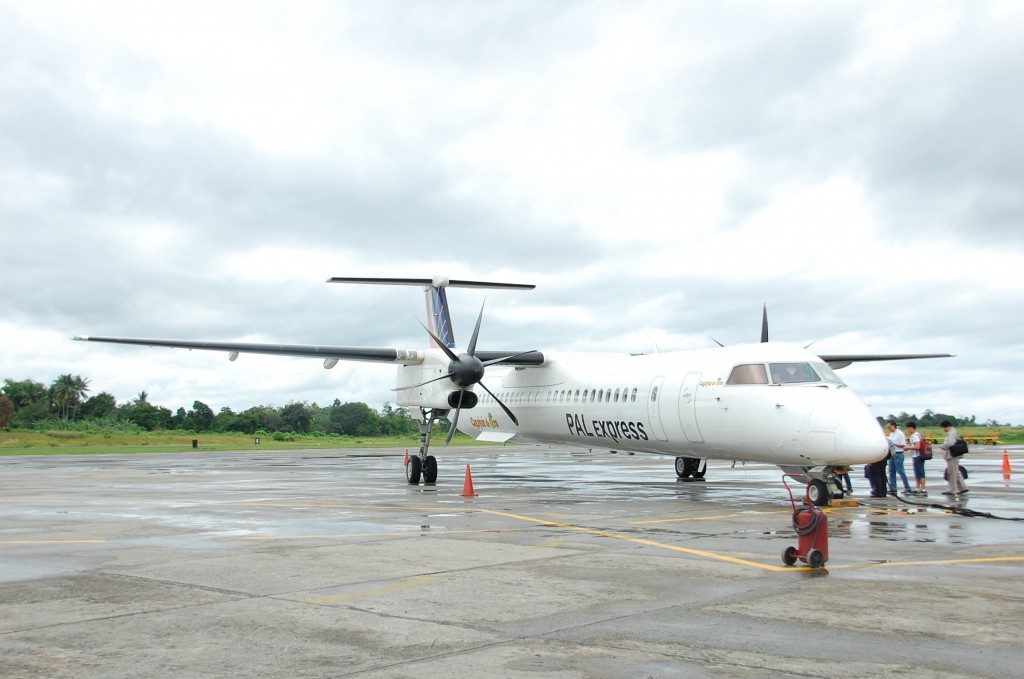 Here’s a photo of the PAL Express plane (along with a shot of the plane’s tail where a cool and golden “Cagayan de Oro” logo complete with pineapple can be found! Nice no?) 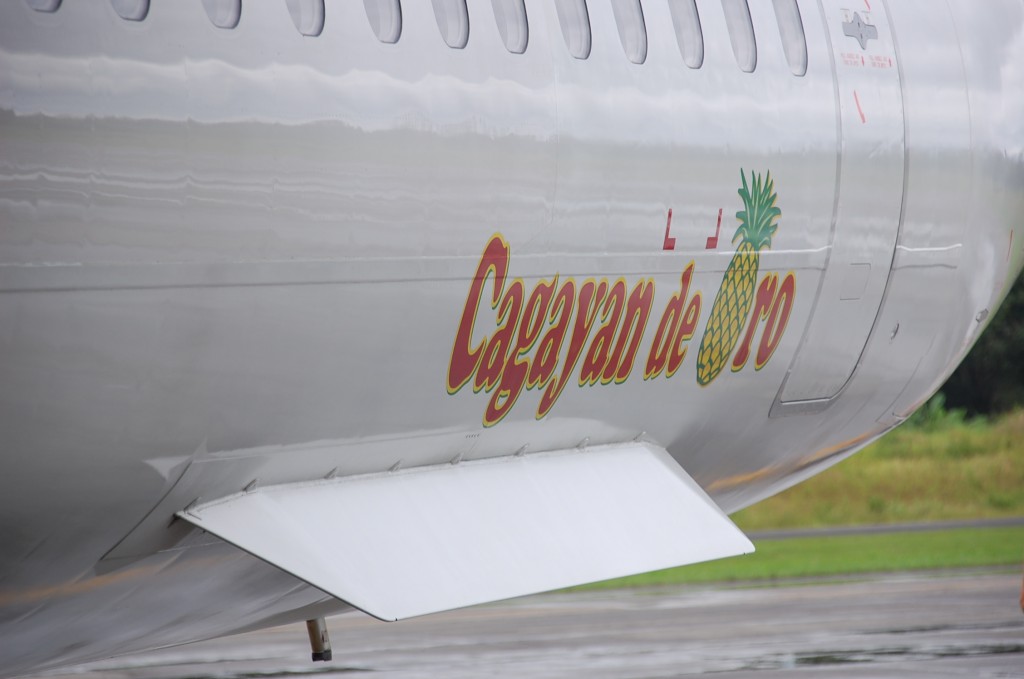 The entire flight was pretty short — very short! A total of thirty eight minutes! Can you imagine? Compared to traveling for 11 hours, you’ll be at your destination within 38 minutes!

One “highlight” during my Cagayan de Oro to Cebu plane ride, by the way, was when the captain took to the microphone and greeted us passengers. It turned out that Captain Patrick Roa had quite the baritone voice LOL So the passengers who were already in deep slumber couldn’t help but wake up when they heard the captain speak LOL The captain was fluent in English and sounded friendly so even if he told us that we were cruising at 16,000 feet or something like that…I, for one, felt safe and secure. Too bad I didn’t get to see the man behind the baritone voice! Hehehe 😀 I’m pretty sure he’s cute.

Anyways, my trip was safe and fast. I highly recommend that you ride a plane the next time you’re planning a CDO to Cebu or Cebu to CDO trip. Less hassle, fees and rates are reasonable and budget-friendly and you can enjoy the sights and sounds of Cebu or CDO in no time!

By the way, you can book your PAL Express flights using your ATM card. Enjoy traveling!