I can already smell the protests courtesy of animal welfare advocates. Horse fights (also known as “Paaway Kuda”), which are part of the culture of indigenous peoples, will be revived in this year’s Kadayawan Festival 2009 celebration. Horse fight competitions will be staged from August 17 to 23, 2009 during the 2009 Kadayawan in Davao City, Mindanao. I bet the people behind the Philippine Animal Welfare Society (PAWS) and other animal welfare organizations can’t wait to travel to Davao and condemn the “cruel” competitions.

Recently, the Davao City Council Committee on Lumads (Indigenous Peoples), led by Councilor Myrna Dalodo-Ortiz, revealed that the National Commission for Indigenous Peoples (NCIP) has approved the staging of horse fights during the Kadayawan Festival.

In a horse fight, three horses, two males and one female, will be put in the middle of an arena. The female horse will be the “prize” that the two male horses will fight over. The male horses will outdo each other by kicking and biting. 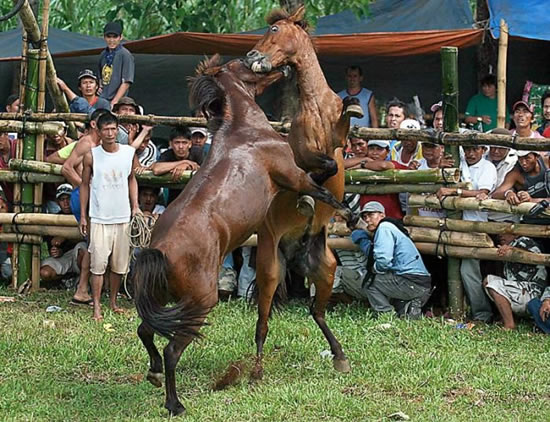 Because of the display of “cruelty” to animals, animal protection advocates succeeded in having horse fight competitions banned from Araw ng Dabaw celebrations in the 70’s.

The tricky thing in all of these, however, is that horse fighting is part of the ethnic customs of Mindanao tribes such as Matigsalugs, Bagobos and Manobos.

How can one ban something when it’s part of culture?