So it’s somehow final now. The Office of the Press Secretary is no longer. New Philippine President Benigno “Noynoy” Aquino III or PNoy will reorganize it and will rename it to the Presidential Communications Office. The latest buzz is that ANC broadcaster Ricky Carandang and “The Explainer” Manolo Quezon III will join the communications team and will play vital roles.

I am, quite frankly, happy to know that Carandang and Quezon will be part of the team. For sure, these brilliant minds will bring with them their years of experience and they will definitely be fab assets to the Aquino administration. No doubt about that.

My concern, therefore, is more about the treatment towards Mindanao journalists now that Aquino has made it clear that the public is his “BOSS” and now that he has two seasoned journalists in his fold. 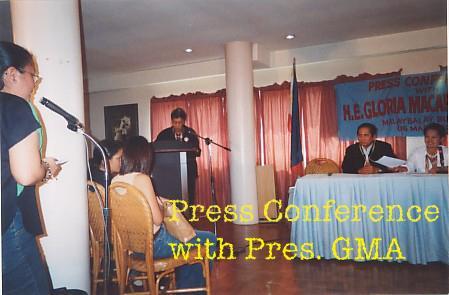 *yes, that’s me asking PGMA a question during one of her presidential visits in Mindanao*

You see, for years, community media practitioners or “local media” do not always seem to receive the same treatment as Manila-based journalists do especially during presidential visits. Which is odd, really, since local media practitioners should be given the same chance to ask questions and capture great photos.

Take the case of Keith Bacongco of Mindanews. In his post, he narrated how he felt as if he was a second class journalist during the April 9 Davao City sortie of then Liberal Party presidential candidate Noynoy Aquino and vice presidential bet Mar Roxas. He narrated how Manila-based photographers tried to takeover one of the vehicles that was supposed to be allotted for Davao City photojournalists. He also shared the sad truth that lines are usually drawn for “local press” but members of the national media can freely roam about.

Also – and this is based on my personal experience – members of the national media oftentimes need not get “clearance” from the Press Secretary anymore. For us “locals,” however, we need to write down our questions, submit it to the Philippine Information Agency (which usually organizes the press conferences during a presidential visit) which will forward it to the Press Secretary. Suwerte mo na lang if your question gets “picked” and that you have the go-signal to ask it personally to the President.

While we local media practitioners understand that Manila journalists are pressed for good coverage, our national counterparts should also understand that we also have duties to fulfill, deadlines to beat. Sure, our articles may only appear in community or regional newspapers or our reports may only appear on regional TV but we exert the same – if not more – effort to get the news. We also want to do our jobs well.

So here’s a simple appeal to Carandang, Quezon, PNoy and to everyone else who will comprise the Presidential Communications Office. Please, treat us members of the Mindanao media community the best that you can. No more letting us feel as if we’re getting the shitty end of the stick. Since it’s inevitable that you bring members of the national media with you during travels, then please brief them well. Let them understand that in “local” visits, the “locals” must be given priority. After all, it’s not every day that we get the chance to interview or see the Philippine President up close.

It’s about time that the local media – especially the members of the Mindanao media community – feel that they, too, are BOSS.