If you’re living in Northern Mindanao, chances are you’ve already heard of the upcoming opening of Starbucks Cagayan de Oro. In fact, I wrote about the much-awaited opening last May, along with a job opening announcement for baristas and store managers. Fast forward a few months later, word’s out that Starbucks CDO is set to open in just a few weeks’ time.

Starbucks CDO is located at Limketkai Mall corner Rosario Drive, right across the Missy Bon Bon gelato and bread store and very near Mc Donald’s. As expected, they got an ultra prime location. That area will soon see the rise of an 18-floor hotel and is just a few blocks away from the Regional Office of the Department of Foreign Affairs, a state university and a mixed-use building. So yeah, the Starbucks CDO branch will enjoy heavy foot traffic.

Hopefully, I can attend the much-awaited opening of Starbucks Cagayan de Oro – said to be the 166th branch in the Philippines and the very first branch in Mindanao.

Truth be told, I like hanging out at a Starbucks coffee shop. I like coffee shops in general but there’s really something about Starbucks that sets it apart from all the rest. I like Starbucks a lot that I even purposely went to its SM Mall of Asia branch a few hours before my flight home just to buy their newest product – the Starbucks VIA® Ready Brew. I bought two boxes of Italian Roast and was even given four free sachets of the Colombia variety. 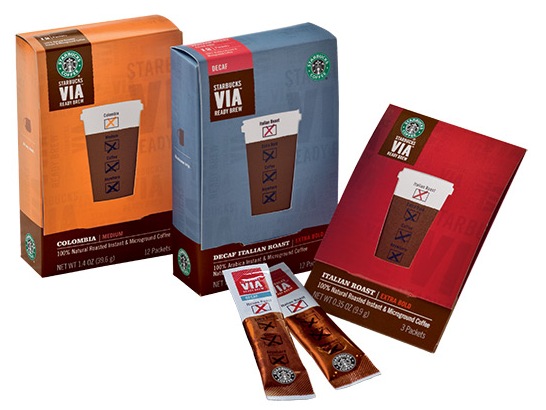 Just like a fresh-brewed cup of Starbucks® coffee, Starbucks VIA® is made with a proprietary, U.S. patent-pending technology to preserve the coffee’s flavor. We can expect more varieties in the future as Starbucks pursue innovation around the Starbucks VIA® platform.

The Philippines will join Japan as the second country in Asia and the fourth in the world to offer Starbucks VIA® Ready Brew.

But you might be asking — what’s the big fuss about this? Isn’t this just instant coffee?

Yes because it comes in instant and microground form. Yes also because it comes in a foil stick and it’s easy to prepare. Just put the contents of your Starbucks Via Ready Brew in a cup, pour hot water (you have the option to add sugar and cream) and that’s it.

No because the Starbucks Ready Via tastes a whole lot richer than the usual instant coffee. It’s “full-bodied” and even the appearance and color of the “microground” coffee looks different – it’s darker.

Starbucks VIA Ready Brew is said to be made from high-quality 100% natural roasted arabica beans so yes, you can expect the same flavor with Via as with a cup prepared right inside an actual Starbucks store.

I particularly liked the Italian Roast variety. Very flavorful and the aroma is just fabulous. On the box you can see an “Extra Bold” statement. The Colombia variety, on the other hand, tastes a bit lighter but still flavorful.

So just in case you find yourself at Starbucks CDO pretty soon, I recommend you try the Starbucks VIA Ready Brew coffee. It’s Starbucks you can bring home 🙂