In its initial offering as a concert producer in Cagayan de Oro (CDO), Joey Pelaez Events is set to conquer the music scene on December 19, 2010 at the Atrium Limketkai Center with The Crooner and The Comedienne featuring the country’s top standard music singer Richard Poon and the fashionable and witty Pokwang, and introducing Markki Stroem of Pilipinas Got Talent fame. 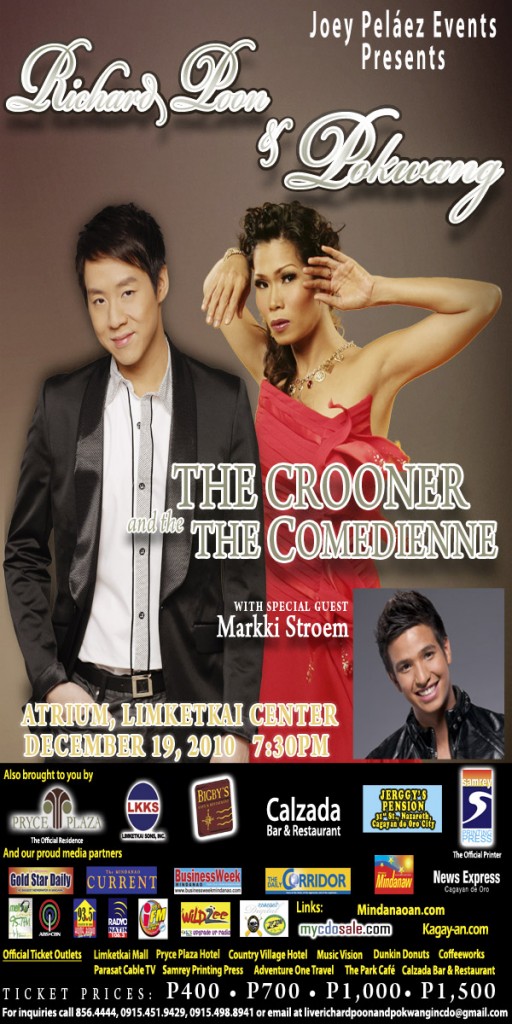 Richard Poon is the son of China’s hugely popular music artist Eva Huang whose genre of music, which blends the taste of the old and the young, has captivated his audience in the recently-held The Crooner Concert held at the Plenary Hall of the Philippine International Convention Center. Pokwang, on the other hand, is the goddess of comedy homegrown at ABS-CBN with her regular programs that include Wowowee, Pilipinas Win Na Win, Banana Split and others. Their unique union on stage at the Atrium Limketkai Center marks a first in CDO this Christmas, historic in a sense because it is also the first concert being produced by Joey Pelaez Events in Cagayan de Oro City.

Joey Pelaez Events started as a dream with a worthwhile advocacy – to contribute in transforming CDO into a city with a metropolitan taste, culture, lifestyle and class that obviates the need for Cagayanons and Mindanaoans to expensively chase stars in Metro Manila. Bringing popular artists in CDO makes it more affordable for everyone across social status and guarantees accessibility of talents and artists to the City of Golden Smiles, educating a wide base of locals from CDO and nearby provinces and cities such as Bukidnon, Misamis Oriental, Iligan, Gingoog and Butuan of an emerging and a refreshing city life, and attracting more tourists as a result.

Inspired by friends in the entertainment industry in Metro Manila, Joey Pelaez Events was set up primarily to stage local events that will jumpstart and shape the local music scene in CDO, an arrangement that ensures original musical productions a run in cities outside Metro Manila and within reach of other localities. Unlike other producers who simply bring shows to CDO, Joey Pelaez Events is a true-blue local producer which explains its heart and passion to make a difference in CDO and Mindanao.

Being the gateway to Mindanao, CDO plays a major role in establishing a musical landscape comparable to Metro Manila that would extend to other parts of the land of promise. And Joey Pelaez Events is bent on fulfilling this promise for the many local concert-goers starting with The Crooner and The Comedienne on December 19 at the Atrium, Limketkai Center – a CDO dream come true and a one-of-kind Christmas treat one shouldn’t miss!

DISCLAIMER: Mindanaoan.com is a proud sponsor of this Richard Poon and Pokwang Live in CDO concert