I was in Cebu City recently to open a small branch of my PR, media, marketing and outsourcing agency and to visit my younger brother at the same time. About a week and a half after I arrived, I received an invitation from fellow blogger and Plurker Jay de Jesus, the Emerging Media Specialist for Public Affairs of the US Embassy, Manila. He asked if I could attend a small, intimate dinner with someone from the US Embassy in Manila and that the dinner was to be held the evening of that very day. I asked him who I was supposed to meet. He said that it was his boss – the Counselor for Public Affairs of the US Embassy in Manila – Richard W. Nelson.

I must admit, I immediately had reservations. I checked my watch — I only had about 3 hours to prepare for what could be a life-changing dinner! Various thoughts also ran across my mind – was I about to be told that I was wanted by the Interpol? Did they manage to unearth some of my previously written newspaper columns or articles and that they want to complain?

So I pried Jay for more details. He said that the US Embassy in Manila, Philippines just wanted to meet some of their online friends. Err…okay. Sure, I followed the U.S. Embassy, Manila Facebook Page and their Twitter account as well but was that really enough for me to get invited to what I believed was a special dinner? Apparently, YES.

Jay also shared a little interesting tidbit. He said that his boss would remind me of Santa Claus! Well, I figured, if I was about to have dinner with a Santa look alike, how bad could it get, right? I knew for sure that it’d be an awesome dinner 😀 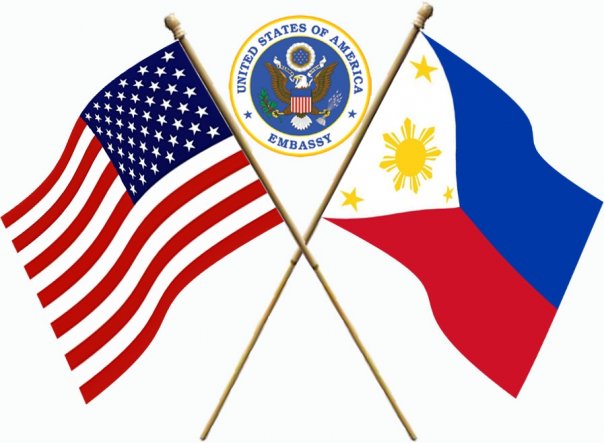 And so I went to the dinner. Actually, I only had a vague idea as to who the other invited guests were. I was told that the Cebu Bloggers Society president was invited but that was it. Was there really a need to panic? I just mentally reminded myself that to be invited was already a big honor and that I just needed to go and hope for the best 😀

Anyhoo, I was a few minutes late (and I hated myself for this) so as soon as I arrived at the restaurant (located at the Ayala Terraces Cebu), I wanted to profusely say sorry right away and explain somehow. Lo and behold, I was the first one to arrive. Whew 😀

I was greeted by Santa the US Embassy in Manila Counselor for Public Affairs Richard W. Nelson. Let me just say this — he was, I believe, one of the friendliest diplomats I’ve ever met. He had a ready smile on his face, he sounded very sincere, he made me feel at ease and (as Jay did tell me beforehand) he had wonderful stories!

We only got to chat for several minutes before the other guests arrived. There were 6 of us all in all, including Mr. Nelson. A small, intimate dinner indeed! Pleasantries were exchanged, we ordered dinner and then Mr. Nelson explained what the dinner was really for. Perhaps he felt there was a need for him to really come clean, so to speak, because apparently we still had curious looks on all of our faces 😛

He started by explaining what his department was and what their duties were. He also said that due to the popularity of new and social media, they started a Facebook Page for the Embassy of the United States, Manila. Currently, the said page has more than 16,000 “fans,” making it the most “liked” FB Page out of all embassies in Asia. How’s that for another record of sorts, eh? And then he said that he wanted his department to spearhead “more interactive” activities – those that could engage the FB and Twitter followers more. That small, intimate dinner was the start 🙂

The evening wasn’t all question-and-answer portions, mind you. Laughter (and lots of it) plus fun stories were interjected. I remember all of us roared with laughter when Santa Mr. Nelson shared stories of his early days as a consul. Unfortunately, I can’t share them here or else I risk never receiving a US visa ever. I still have plans of visiting Times Square, taking a photo of Lady Liberty and eating at Gray’s Papaya.

And oh, by the way, Mr. Nelson has a very soothing singing voice! He regaled us with a Filipino song, no less! (We all later found out that he’s married to a lovely Filipina and that they have two boys — one “guwapo” and one “pogi,” he says)

That night really was very special, thanks to the US Embassy Manila and of course, to Mr. Rick Nelson. It was a night to remember.