Ever since I had the utmost privilege to meet the Ambassador of Malaysia to the Philippines Dato Seri Dr. Ibrahim Saad and his beautiful wife Datin Seri Dato Zainab Kader, I’ve become so fascinated with Malaysia, its people, its culture and traditions and even their food! I’ve also become quite fascinated with certain similarities between the Philippines and Malaysia and the glaring fact that at the end of the day, we really all are connected.

So when I received this special invitation to attend the wedding reception of the Malaysian ambassador’s daughter Zaireen Ayu Ibrahim and her groom Shazlan Sufian, I knew I just had to go. Not only was it a fabulous chance for me to witness an akad nikah (traditional Malay wedding) but it was also a chance for me to meet and mingle with new Malaysian friends.

Just look at the nice wedding invitation I got in the mail: 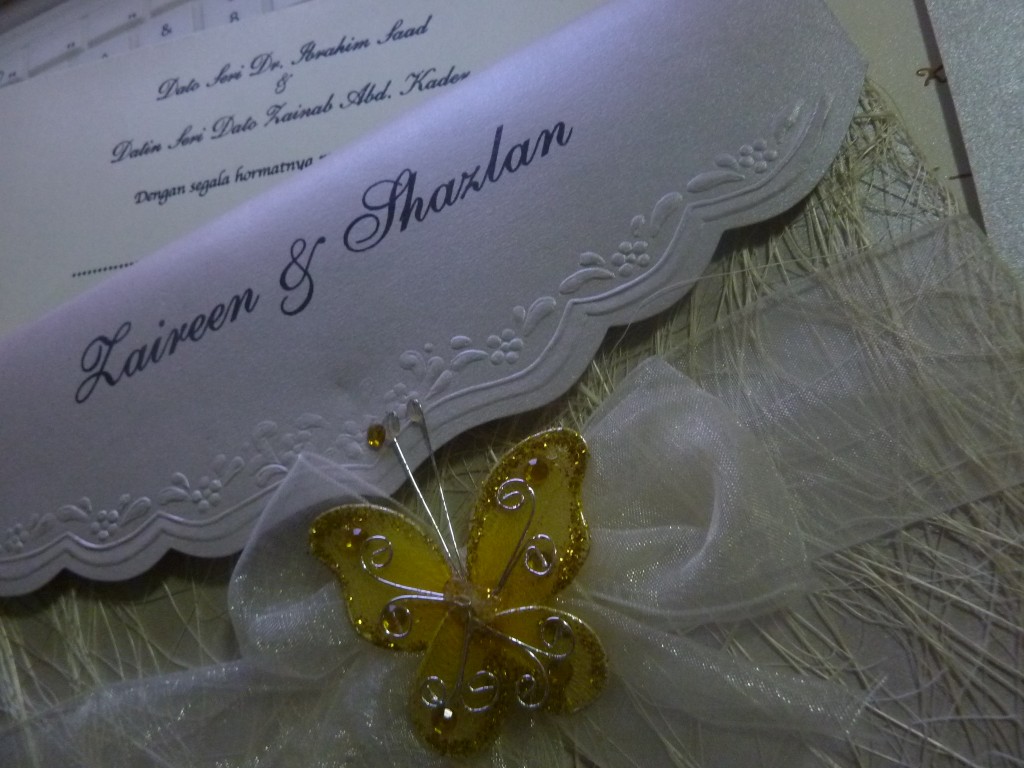 So, armed with my invitation and confirmation from my date that he was 110% sure that he’d attend, I flew to Manila. Yes, I said “date.” So okay, he really wasn’t technically my date date (because we’re friends and I know his wife and family and we worked together during the most recent national campaign) but I told him that I’d treat him like one and call him that for the purpose of this blog post! Haha! 😀 If you’re interested to know who he was, just read the series of posts here and I bet you can figure things out 😉 Or better yet, here’s a photo of him! So yes, I’m going to call him my date. And I bet he won’t mind 😛 And I’ll now move on before I digress further (LOL)…

The wedding reception was held at the ballroom of a posh Makati hotel. Dress code was formal. I wore a pinya barong. Hair and make-up – check. High heels – check. I was so scared to be late that I arrived about half an hour early 😀 Luckily, my date arrived on time and, as always, he looked good in his suit. We were seated at this table: 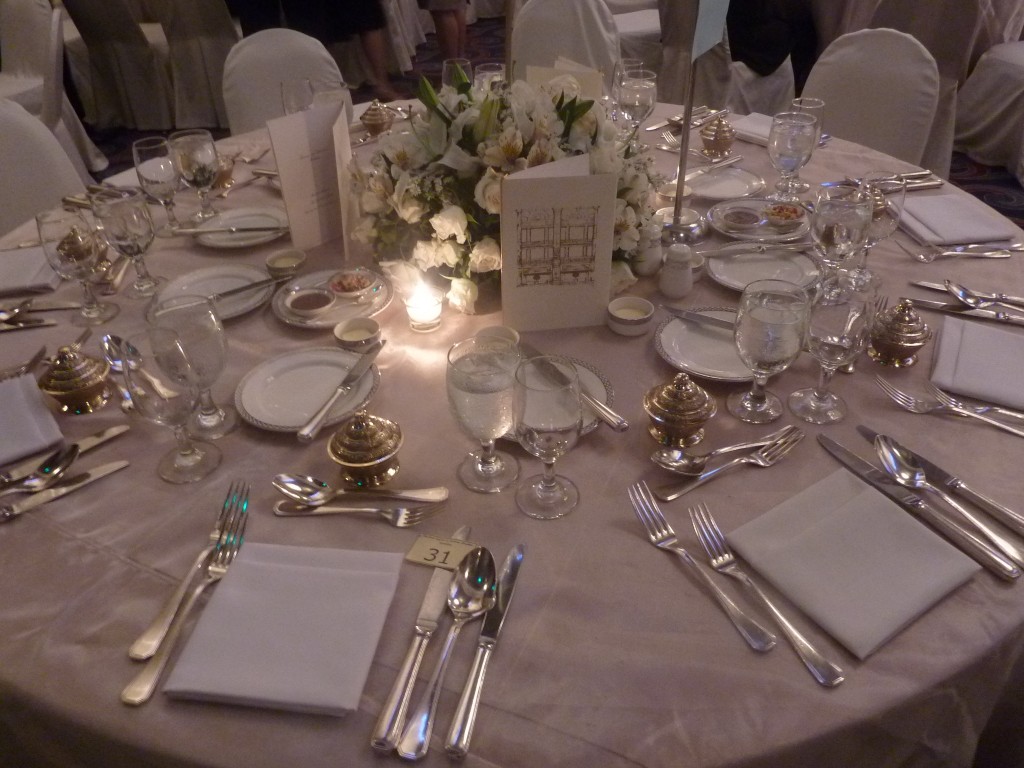 See those golden brass containers? They actually have a significant role to play in a traditional Malay wedding. I’ll talk about that later.

So what’s a traditional Malay wedding like, you may ask? From what I’ve gathered, it usually starts with the akad nikah or the formal contract of marriage. An akad nikah is also called the marriage solemnization or wedding vows. The second part is the bersanding or enthronement. It’s like a family celebration that usually lasts for two days. Usually, a bersanding will be celebrated in the house of the groom and then in the house of the bride. A third bersanding can also be held for friends and other relatives. In the case of Zaireen and Shazlan, the wedding reception in Manila is actually their fourth 🙂 During a traditional Malay wedding, the men wear baju melayu or a traditional Malay costume for men. A baju melayu looks like this.

There were a lot of Malaysians who flew in just to attend Zaireen and Shazlan’s reception. That alone proves just how well-loved and well-respected Dato Seri Dr. Ibrahim Saad and Datin Seri Dato Zainab Kader are. In his message during the reception, even the Ambassador shared just how touched he was.

“Seeing all of my friends here makes me feel as if I never left home,” he said. 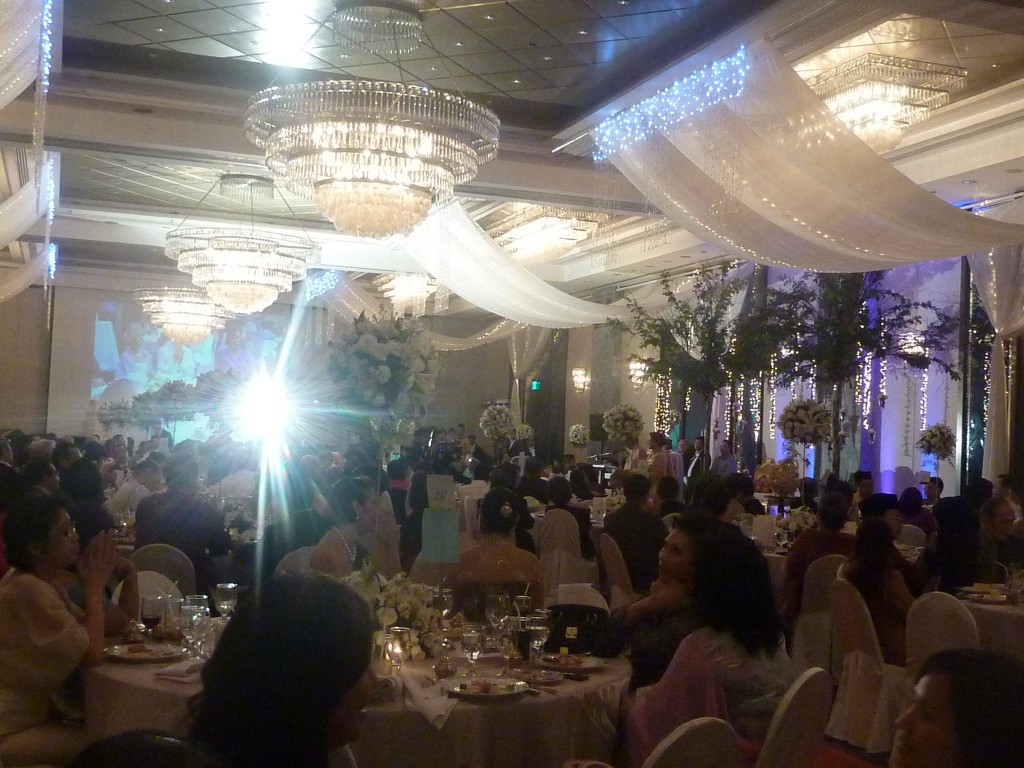 There were tons (and I mean tons!) of name-droppables during the wedding reception. No less than Philippine President Benigno Aquino III was there. Vice President Jejomar Binay and Malaysian Foreign Minister Dato Sri Anifah Haji Aman were also present. Other guests included the Crown Prince of the State of Pahang Highness Tengku Abdullah Ibni Sultan Haji Ahmad Shah; His Highness Tengku Arif Bendahara, Brother of the Sultan of the State of Pahang and uncle of the Crown Prince and Spouse; Former Malaysian Deputy Prime Minister Tun Musa Hitam; Datuk Mohd Radzi Abdul Rahman, Secretary General, Ministry of Foreign Affairs of Malaysia; ARMM Governor Ansaruddin Alonto Adiong, Chavit Singson and DSWD Sec. Dinky Soliman. I also spotted (and had photos taken with) super pretty Mikee Cojuangco and husband Dodot Jaworski. (Oh, I have a small anecdote about this, by the way. Me with my thick face mode on approached Mikee and asked if I could have a photo taken with her. She smiled and gladly said yes and then asked her husband to take our photo! That was really cute. And then my photo with Dodot was taken by Mikee. What a fab, cool couple!)

And oh, before I forget. That golden brass container found at our table is what Malaysians call bunga telur or “flower egg.” It’s usually the guest favor in Malay weddings. It symbolizes fertility. Inside the golden brass container, I found a hard boiled egg, some flower petals and some leaves (I think those were called screpine).

Indeed, it was a fabulous night. One for the books! I went back to my hotel room that night feeling like a new person. That wedding reception was an amazing opportunity for me to see, feel and hear the beauty of Malaysia and of Malaysians. And of course, I will always be grateful to His Excellency Dr. Ibrahim Saad and Datin Zainab Kader.

To Shazlan and Zaireen – may you have beautiful, love-filled years ahead of you!