Remember my earlier totally fan girl mode blog entry about me wanting oh-so-badly to watch the upcoming All 4 One and Color Me Badd concert ()? (A lot of my faithful Mindanaoan.com readers left comments on that blog entry and some also sent me nice, sweet messages through my official Facebook page! Aww 🙂 ) Well, it seemed my lucky stars shone brightly that day and thanks to the positive vibes you guys sent, I have fabulous news to share with all of you!

Mindanaoan.com is an official media partner of the All 4 One and Color Me Badd Live in Cagayan de Oro Philippines concert!!! 😀 (Just imagine that sentence as if it’s blinking and there are fireworks behind the words HAHAHA!!! Yup, that’s HOW excited I am!!! I already did a lot of cartwheels, folks, and had several screaming-at-the-top-of-my-lungs episodes, believe me! HAHA!) I am a really big fan of Color Me Badd and I cannot wait to meet them!

Anyways, right after I posted that blog entry, I did what every normal fan would do — I searched for their latest videos on YouTube, checked their official website (ably managed by Patricia!), stalked them on Facebook (HAHA! Kevin and Bryan already added me back! Yes, yes, I did more cartwheels when that happened a few days ago :P), followed them on Twitter (add Mindanaoan HERE and add CMB HERE) and searched far and wide (naks!) for recent photos and trivia and what-not. Well, I found a wealth of information about Bryan Abrams, Mark Calderon and Kevin Thornton (Color Me Badd’s fourth member, Sam Watters, is already an accomplished music producer and decided that he’d rather stay behind the limelight…for now *wink* *wink* *hint* *hint* Sam!).

More importantly, I found this photo of Color Me Badd lead singer Bryan Abrams. Someone pass me some cold water! 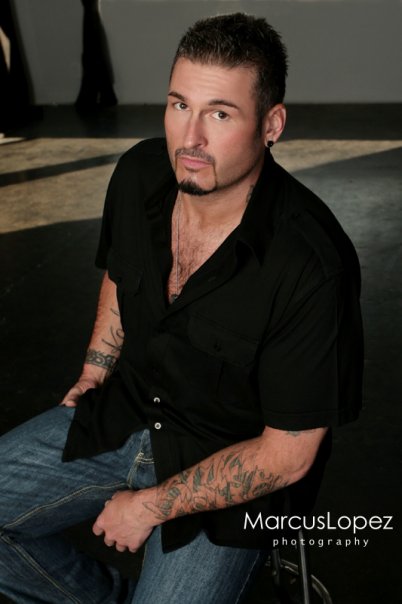 The man does not only have sharp, good looks but he can sing and he can do it beautifully and soulfully. Couple that with Mark’s soft and flavorful voice and Kevin’s undeniably baritone voice and you can be sure Color Me Badd will bring the house down on September 10!

Just please do me a favor and watch this…and you’d understand how the boys can still knock your socks off!

By the way, I also tried to reach out to a few generous souls who gladly helped me out. A big shoutout to Sir Mike, Rap and of course, to Sir Boy! Thank you sooo much for ushering in Christmas super early for me this year! 😀

Speaking of Christmas, here’s the latest press release that I wrote about the All 4 One and Color Me Badd Live in CDO concert. If you guys happen to read the following paragraphs in a newspaper or other website or blog somewhere, don’t worry, okay? 😀

The Philippines celebrates the longest Christmas season – 100 days to be exact – compared to all other countries in the world. However, it seems Christmas has even come way earlier this time, not only for Kagay-anons but for all other Mindanaoans as well. Santa has ushered in something exciting and truly magical that’s set to happen on September 10, 2011 (Saturday), 8 PM at The Atrium of Limketkai Center, Cagayan de Oro City, Mindanao — the much-awaited back to back concert of popular and multi-awarded international musical groups All 4 One and Color Me Badd!

For the first time ever, these supreme performers, who have managed to sell a combined 30 million plus records worldwide, will belt out their award-winning mega hits in one must-see concert that’s guaranteed to set the stage on fire!

All 4 One is responsible for the chart-topping hit “I Swear,” which won a Grammy Award in 1995. The song was so successful that it enjoyed an 11-week run at number 1 on the Billboard Hot 100 chart! “I Swear” has also been named as one of the greatest love songs of the 20th Century by the American Society of Composers, Authors and Publishers. All 4 One also produced the well-loved “I Can Love You Like That.”

Color Me Badd, on the other hand, hit it big in the 90’s (the group is even largely credited to have pioneered the boy band phenomenon) with their sensational songs “I Adore Mi Amor,” “All For Love,” “Choose,” “Thinkin’ Back,” “Time And Chance,” “Sexual Capacity” and “The Earth, The Sun, The Rain.” However, it was their sultry rendition of “I Wanna Sex You Up” that garnered a lot of attention. The song did not only hit number 1 but it was also included in the New Jack City soundtrack plus became certified 3x platinum in the United States by the Recording Industry Association of America. Now reunited (they broke up to pursue other interests in 1998) and currently working on an album that aims to highlight a more mature sound, Color Me Badd will prove exactly why they were a force to reckon with then and now.

Both All 4 One and Color Me Badd will sing their chart-toppers as well as perform a special selection of Michael Jackson’s greatest hits in honor of the late King of Pop.

Made possible by Ovation Productions, the All 4 One and Color Me Badd back to back concert is truly welcome news not only for fans of these sensational pop and R&B groups. It’s also welcome news for lovers of quality, timeless music, for fans of sheer talent. Incidentally, veteran promoter Renen de Guia of Ovation Productions was also responsible for bringing in Color Me Badd to the Philippines back in 1992! 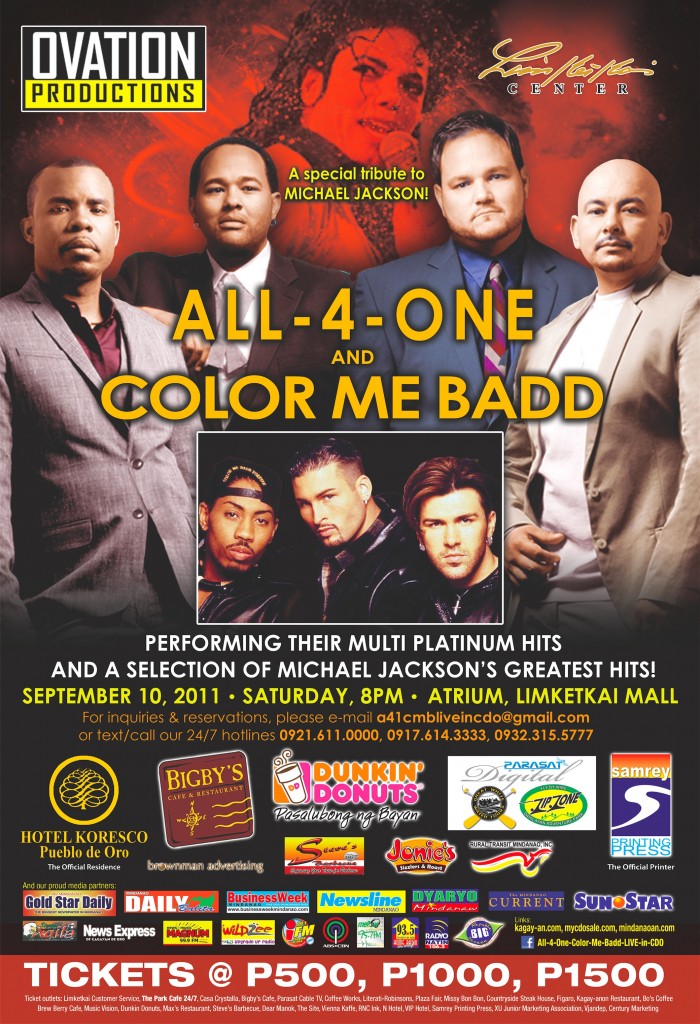 SO WHO’S GONNA WATCH THE CONCERT? 🙂

If you’re from outside Cagayan de Oro and you need tips on where to stay in CDO or how to get to CDO from where you are, please leave your questions at the comments box and I would gladly help you out 🙂