The 2014 Kagay-an Festival schedule of events has finally been revealed! The CDO fiesta is now also known as Higalaay Kagay-an Festival 2014 (Higalaay means friendship – pretty apt since Cagayan de Oro is known as the City of Golden Friendship) and is celebrated in honor of the city’s patron saint, St. Augustine (August 28).

Check out the following Kagay-an Festival 2014 core events which are the rallying points for the campaign to promote Cagayan de Oro City and the surrounding areas as an investment and tourism destination: 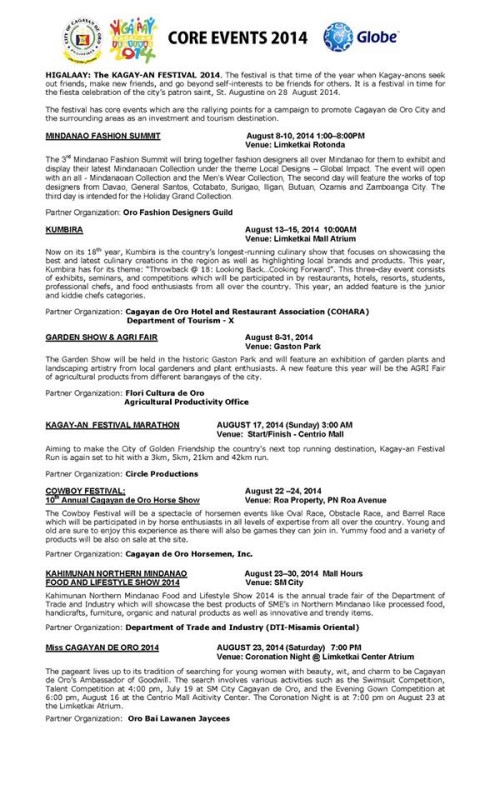 Kumbira (the country’s longest-running culinary show) on August 13 to 15, 2014 at the Limketkai Mall Atrium, 10am

Kahimunan Northern Mindanao (the food and lifestyle show 2014) will be at SM City CDO on August 23 to 30. O 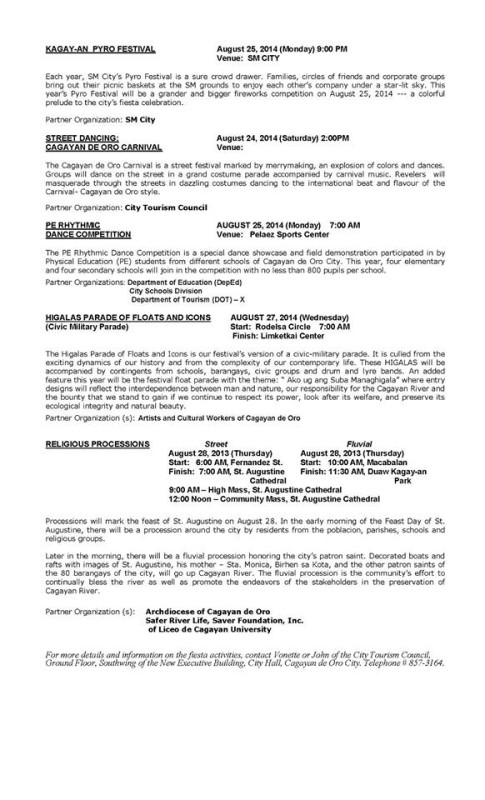 Kagay-an Pyro Festival on August 25 (Monday) at SM City which will start at 9 p.m.

Street Dancing: Cagayan de Oro Carnival which will be different this time that the previous years will be on Augus 24 (Saturday) 2 p.m.

Higalas Parade of Floats and Icons and Civic Military Parade on August 27, will start at Rodelsa Circle 7 a.m. and finish at Limketkai Center

There will be 2 Religious Processions. The Fluvial Parade on August 28 (Thursday) which will start at 10 a.m. at Macabalan and finish at Duaw Kagay-an Park. The street procession will start at 6 a.m. as the St. Augustine Cathedral