And, like anybody whose post unknowingly attracted thousands of “likes,” shares, retweets, reposts and comments from people around the world, I now have my own story to tell. I also learned a couple of lessons, both good and bad. Well, I want to focus on the good so trust me, there were more good than bad. Did I mention, though, that as a result, I received several TV and radio interview requests and hundreds of friend requests from strangers from all around the globe? Yep. Oh, the wonders of technology.

Now, before I share my “lessons learned,” let me just say that a few years back, at the height of Typhoon Sendong, I also experienced what it was like when my posts and tweets get viral. My tweets were used by various media outlets, followed by national and international aid agencies, retweeted by the President of the Philippines himself (IKR!!!) and my Mindanaoan Twitter account got followed and monitored by world leaders, government officials and other personalities. It was overwhelming, I tell you. 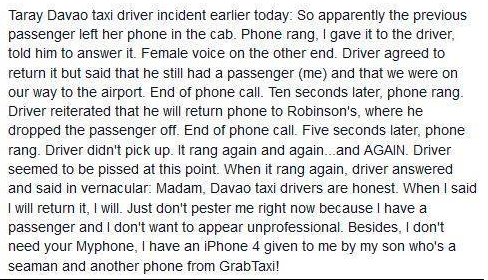 Taray Davao taxi driver incident earlier today: So apparently the previous passenger left her phone in the cab. Phone rang, I gave it to the driver, told him to answer it. Female voice on the other end. Driver agreed to return it but said that he still had a passenger (me) and that we were on our way to the airport. End of phone call. Ten seconds later, phone rang. Driver reiterated that he will return phone to Robinson’s, where he dropped the passenger off. End of phone call. Five seconds later, phone rang. Driver didn’t pick up. It rang again and again…and AGAIN. Driver seemed to be pissed at this point. When it rang again, driver answered and said in vernacular: Madam, Davao taxi drivers are honest. When I said I will return it, I will. Just don’t pester me right now because I have a passenger and I don’t want to appear unprofessional. Besides, I don’t need your Myphone, I have an iPhone 4 given to me by my son who’s a seaman and another phone from GrabTaxi!

A little background and scenario setting: I had just checked out of my Davao hotel. I was in town to cover the BIMP-EAGA International Business Leaders Conference and Trade Fair. I had just a little over an hour left before my flight to Cagayan de Oro. Asked the hotel staff to hail a cab for me. And the rest, as they say, is history.

I was at the Davao airport pre-departure area when I shared that already celebrated post. My plane was already boarding but I felt I needed to share what happened inside that Davao taxi while I was still “in the moment.” Hence, the concise sentences.

That post was meant only for friends to read. A lot of my friends already “liked” it and left comments. However, a journalist-friend of mine, Nef, asked for my permission to repost it. I said yes. As fate would have it, he was apparently friends with the admin of the “Inday Sara Duterte” page (former Davao City mayor and daughter of current Mayor Rodrigo Duterte). Then, this happened: 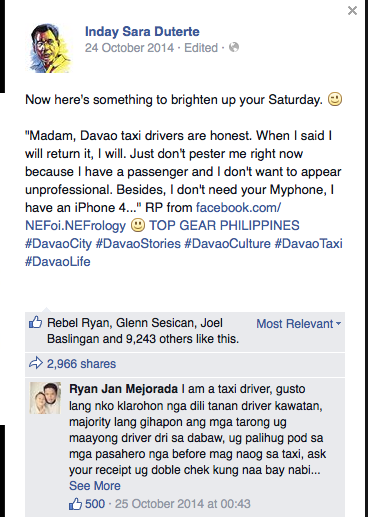 It didn’t end there. More pages reposted it, more websites wrote about it, more groups discussed it, more people reacted to it. My post got featured on TV even!

Which now brings me to my “lessons learned.”

First off, allow me to emphasize that technology per se is not bad, IMHO. Technology, after all, got us to where we are now. The debate lies on how and why you use it. In my case, I shared a story based on my own experience.

Lesson #1: Write raw but don’t hesitate to edit. Writing raw is good in the sense that you capture the “magic of the moment.” Your words are as real as real can be. For my post, I shared it with only good intentions in mind. I wanted to illustrate the honesty of Davao taxi drivers. However, sometimes emotions get the best of us so when you have a moment, go back, review and don’t hesitate to edit. It is, after all, your own social media account. You can post and edit whatever you want.

Lesson #2: Do practise proper Internet etiquette and online responsibility. “My own account, my rules” – while this rings true, I think we all should still remember that we influence our readers, too. How do you want to have an impact on someone? Do you want to inspire or demoralize? Do you want to cheer someone on or bully him or her instead? Think before you click.

Lesson #3: Be ready. I guess these two words pretty much sums everything up. Be ready. Be ready to be overwhelmed, basically. When your post gets viral, you pretty much have to brace yourself for just about anything. Be ready for compliments and friend requests from random strangers. Be ready for media interview requests. Be ready for negative reactions and trolls. Would you believe there were some people who criticized me for mentioning the phone brands and even went to the extent of accusing me of being paid? Of course, I just found those comments ridiculous but those really proved that there are people who’d say baseless, weird stuff. In my case, I could only count the trolls on one hand so like I said, the good triumphs over the bad 🙂

* photo of this purple taxi in Davao for illustration purposes only. The one that I rode in was colored white

That viral Facebook post experience was a concrete reminder that with easy access to technology, more and more people can now express their opinions, get involved in various conversations and causes and share things. Hopefully, we can all use technology and the power of social media for good. Are you with me? 🙂