The Cagayan de Oro Press Club (COPC) has released a statement of indignation where they cried foul over alleged discrimination in the media coverage for the first presidential debate set on February 21, 2016. The debate is the first in a series organized by the Commission on Elections (COMELEC) alongside various media companies.

Please read and share the full statement of the COPC on why the call for BOYCOTT. I also shared a few personal thoughts below.

We, members of the Cagayan de Oro Press Club Inc., express our serious concerns over what appears to be an attempt to bar the provincial press from covering the first Presidential debate scheduled at the Capitol University on February 21, Sunday. We see this to be a clear case of discrimination towards the province-based media.

There have been many instances in the past when Manila-based media organizations have condescended on the provincial press. The Presidential debate in the city is no exemption.

Organizers (Kapisanan ng mga Brodkaster sa Pilipinas, GMA7, and the Philippine Daily Inquirer) of the event have made it clear in a letter to the Philippine Press Institute (PPI) that they have allotted only five slots for local editors/publishers as debate audience and five slots for newspaper reporters. In the same letter, it was also made clear that five newspaper reporters will only be allowed access to the event’s media center–a separate venue where a video monitor will broadcast feeds of the debate.

It is our position that the Presidential debate is far too important, and should be beyond corporate media’s quest for higher ratings and wider readership.

Further, it is an affront to the local press community to limit the number of newspaper reporters to only five slots, and for the rest to be stifled into covering the event from a widescreen monitor. Why hold the debates here in the first place when the organizers can just as easily broadcast the debate from their studios in Manila?

The organizers further stated that they are allowing PPI to choose who to shortlist so as to ensure that “only legit local press” are allowed to cover the event. But who would know better than the press community of the host city?

Manila-based media entities should realize that they do not have the monopoly of serving public interest. The people’s right to know must weigh far heavier than any media entity’s “exclusive rights” to an event that is clearly of national interest. We are talking about the next possible President of the Republic. We are all stakeholders.

We ask that Manila-based organizers lift this “exclusivity clause” in the coverage of the presidential debate to be held in our city. This early, there have been suggestions for a Cagayan de Oro media boycott of the debate but we still trust that, in the end, reason will prevail, and that the organizers would reconsider their position and right this wrong.

Stop this discriminatory and condescending attitude towards the local press community. 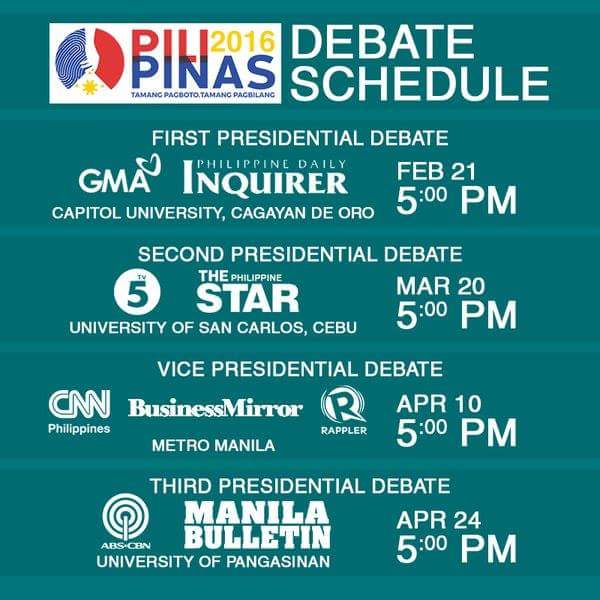 Personally, I feel really disappointed with this. First off, apparently the organizers do not have any plans of inviting the citizen media / blogging community in CDO. At this day and age, apparently some people still don’t see the importance of the online folks.

Secondly, I understand that the organizers want to make sure that only legitimate media practitioners are invited but I echo Mindanews’ Froilan Gallardo’s statement – who better to know the local media community than the local press club? I may be a blogger but the traditional and citizen media groups have had a smooth relationship and we know and respect each other. Also, the CDO media community is fairly small. People know who the “hao siao” folks are. These can easily be filtered out.

I initially wanted to cover the debate myself. I believe that the debate is of national interest and I feel that it is my duty as a blogger (and someone who was a journalist years ago) who is blessed to have regular readers and followers to be the eyes and ears at the debate venue. Sadly, the chances of this happening is getting dimmer by the minute.

To be fair, a top ranking GMA 7 executive has been kind enough to help me secure a seat. I am very grateful for this. However, the local GMA 7 group told me to still acquire accreditation from KBP/COMELEC. I was then given the number of the KBP chairman. I feel this will still entail a long and tedious process. Hours later, this call for boycott by the COPC. I figured I can still monitor via live TV. Nothing can stop me from doing my duty. Ka-sayang lang.