It’s inarguably the most anticipated and most talked about tourist spot in all of Mindanao – Seven Seas Waterpark. Located technically at Barra, Opol, Misamis Oriental, people tend to still associate it with Cagayan de Oro especially since it’s just literally a few moments away from the Opol/Bulua boundary. Seven Seas Waterpark is owned by Elpidio “Elpie” Paras, the same visionary who runs Dahilayan Adventure Park a.k.a. the home of Asia’s longest dual cable zipline.

According to a Facebook post on the Seven Seas Waterpark page, the theme park is now on the final stages of construction. The post says painting of the pools now underway, pathways and landscaping now taking shape, perimeter fence is almost done, detailing of the galleon arcade is almost finished, and the rotunda is done. The testing of the rides will also be conducted in a few weeks’ time.

What was interesting about that post, though, was the seeming “shade” thrown against “big ticket parks” that “are moving elsewhere.”

Just in case you haven’t heard, Cartoon Network and Six Flags were allegedly supposed to put up theme parks in Cagayan de Oro but changed plans because of the ongoing conflict in Marawi City, roughly 130 kilometers away.

In an article published via the Philippine Daily Inquirer, adviser to the director general of the Philippine Economic Zone Authority for the ASEAN and North America areas Elmer Francisco said that Cartoon Network and Six Flags “expressed interest” in building theme parks in CDO but because of the ongoing Marawi siege, PEZA supposedly “redirected” them to Central Luzon instead. Francisco even said that “tens of thousands of potential job opportunities” and revenue from the “indirect impact” of the projects on hotels, restaurants and other businesses were lost. The two theme parks were allegedly worth around Php 1 Billion each.

Cartoon Network has a waterpark in Thailand. Six Flags, on the other hand, mostly has waterparks in America. They are currently building parks in China and Dubai.

You can’t help but wonder:

1. What made Six Flags and Cartoon Network consider Cagayan de Oro? (and not other urban areas in Mindanao?)
2. The PDI article says the two corporations haven’t completely backed out. Does that mean that they will consider CDO again once the Marawi siege is over?
3. What made PEZA redirect them to Central Luzon? Instead of asking them to wait?
4. Construction of the Seven Seas Waterpark started in 2015. I’m assuming PEZA and the local business community knows about the developments. Are two additional theme parks in the same city viable? Cartoon Network and Six Flags are obviously mega MNCs. Shouldn’t we support a local business instead?
5. Lastly but definitely not the least – according to its website, PEZA oversees and administers incentives to developers/operators of and locators in world-class, ready-to-occupy, environment-friendly, secured and competitively priced Special Economic Zones. I checked the list of Special Economic Zones. Currently, Paseo del Rio is the only area duly listed under the “Tourism” category. I doubt if the two waterparks will be established there. So…what gives?

I’m a curious cat so hopefully someone can shed light on those things. I repeat – I’m curious and NOT inciting controversy. After all, if we really think about it, this means that Mindanao lost two huge investments.

* NOTE: I sent email-inquiries to Cartoon Network and Six Flags. I’ll let you guys know if there are any updates. 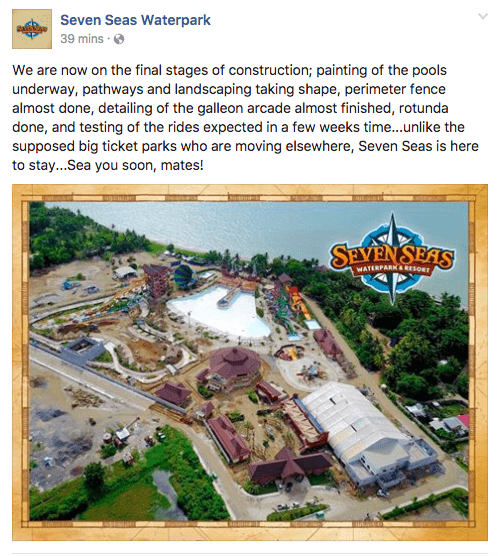