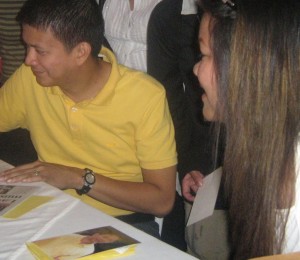 I remember the very first time I interviewed him was via text message as well. He was Sorsogon’s representative then and was closely associated with former President Joseph “Erap” Estrada. Later on, he served as the late Fernando Poe, Jr.‘s spokesperson during the latter’s presidential campaign trail. It was a time when I felt that the local newspapers barely had access to the opposition. Most, if not all, of the stories that I read back then were anchored on the side of the administration. There were hardly any comments from the opposition. It was a time when the phrase “no comments have been received as of press time” was so overused.

When I asked my colleagues as to why there weren’t able to get reactions or comments, they said that they didn’t know whom to contact and more importantly, how to contact them. Unlike national media practitioners who have quick access, local media people like us weren’t as lucky back then. I took that as a challenge. I asked around, did my research and pulled so many strings. As expected, it was difficult to get a hold of the right people because, really, it’s a sad fact that a lot of politicians don’t really give as much “priority” to small local media practitioners as they do to national, Manila-based writers.

Fortunately, I was given then Congressman Chiz Escudero‘s personal number and with lots of intestinal fortitude, I sent him a text message. A very accommodating Chiz answered all of my queries and he even called just to make sure that I got my facts straight.

My very first interview with him was truly memorable. Apart from the fact that Sir Chiz was very pleasant and gave me helpful data and lots of quotable quotes (but of course!), the story I wrote was published as banner headline and all of our copies got sold out that day! Even radio stations “adopted” my story and used it as their on-air topic. That was pretty cool.

Sir Chiz was also responsible for introducing me to Da King FPJ and Sen. Loren Legarda during the two’s campaign trail in Mindanao. Needless to say, for a small time media person like myself, that was a major thrill back then. I had the exclusives – exclusive interview, exclusive photos, exclusive details…exclusive exclusives! And boy, did our newspaper sell well that time or what!

Anyways…the rest, as they say, is history.

To you, Sen. Chiz, may you continue to be the agent of change!