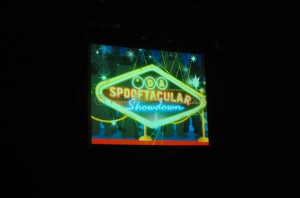 It was a chilly Friday night (November 14, 2008) when my mom and I went to watch the ASAP Live-produced and Phillip Lazaro-directed “Da Spooftacular Showdown” comedy show featuring top Filipino comedians Jon Santos, John “Sweet” Lapus, Candy Pangilinan and Pokwang (who was that week’s guest). We arrived at Music Museum, Greenhills two hours early, which was fine since we wanted to have dinner beforehand.

We spotted former Pinoy Big Brother Celebrity Edition winner Keanna Reeves, by the way. She, along with a much younger guy, stayed in front of the Starbucks joint near the Music Museum entrance. She looked restless and seemed to know that people around her were staring at her and talking about her. Who wouldn’t be when she was wearing a very sexy attire? It was just really amusing when some people who stood near my mom and I kept on saying out aloud, “Sino nga yan uli? Nakita ko na yan sa TV eh. Di ba siya yung nag testify sa Senado na escort daw siya?” (Who’s that again? I already saw her on TV. Isn’t she the one who testified before the Senate and said that she’s an escort?) 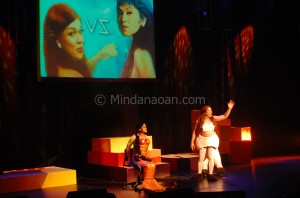 Anyways, after dinner at one of the restaurants at the Promenade area, we went back to Music Museum. I already bought our Orchestra Center tickets online via the Ticketworld website a few days ago so we just breezed right through the entrance door. Each ticket, by the way, was priced P2,000.00 each (so that’s P4,000.00 for both tickets) – pretty expensive but the hefty price supposedly guaranteed two of the best seats in the house. 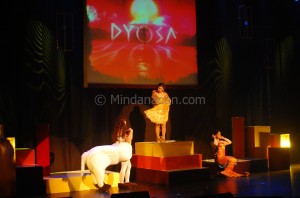 Our seats were located along Row G which were not really located at the center and were really not the “better seats.” In fact, up to the minute the show started, there were so many vacant seats in front of us that I almost wanted to request that we be transferred. After all, we paid the same price. Still, I wanted to enjoy the night and not go through hassles so my mom and I opted to just stay put.

The show, as in most (if not all) shows here in the Philippines, started late. What supposedly was an 8 PM show started at a little past 9 PM. That was not good at all.

And so “Da Spooftacular Showdown” began. There were still a lot of empty seats (I reckon most of those in front were for sponsors or members of the media or friends of the actors). I guess it’s either the show lacked promotion or people simply found the ticket prices too expensive (ticket prices were P1,500, P1,850 and P2,000) 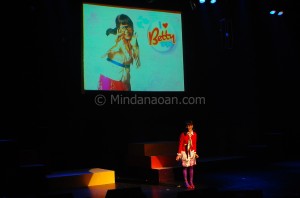 By the way, my mom and I spotted celebrities Gelli de Belen, Donita Rose (who was with her husband) and former actor Bojo Molina.

Jon Santos, John “Sweet” Lapus and Candy Pangilinan opened the show with a spoof on the Anne Curtis-starrer “Dyosa.” Sweet immediately grabbed the audience’s attention when he appeared wearing a costume depicting a white horse. Jon played the sirena (mermaid) and Candy was the bird. The tirades between the three on who will be the next “Dyosa” were funny and witty – I especially liked the part where the three outwitted each other on who had more songs written about them etc. 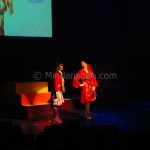 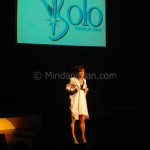 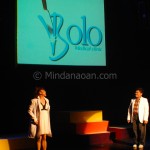 The show was all right. There were a lot of runaway, totally certified, 100% guaranteed downright funny jokes, spiels, spoofs and adlibs. Watch out for Sweet’s take on his Dyosa horse character — he was really hilarious when he did the “Exorcism” thing. I also loved Sweet’s impersonation of his friend Kris Aquino in the “Oh Boy! It’s Kris” segment. He really captured Kris’ facial expressions, mannerisms and even the way she stands and delivers her “Deal or No Deal” statement. And, of course, who can ever forget his spoof on Janina San Miguel, the former Bb. Pilipinas-World? Sweet oh-so-bravely wore a gold swimsuit, to the sheer amusement of the audience. He delivered his Janina spoof lines really well…plus you will be amazed at how flawless Sweet is! 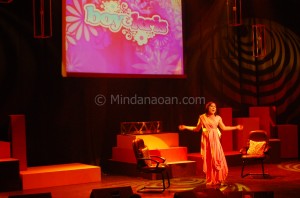 Candy’s spoof on Bea Alonzo’s character in Betty La Fea was a huge hit. Watch out for the Betty as a flight attendant segment – you will really love it! That really had me laughing out loud! Candy actually made the character very endearing. Candy’s Nora Aunor impersonation was also very good although I must say I didn’t quite understand why, according to her, some Nora Aunor fans didn’t like the way she impersonated their idol. There wasn’t anything offensive – the spoof was just fun and funny so there’s really no need for the Superstar’s fans to get worried.

Pokwang, that night’s guest, was also in her element. The audience loved her delivery of “Eeeww” ala Ruffa Gutierrez. She also did a great job impersonating the feisty Annabelle Rama. Like the three other seasoned comedians, she also adlibbed and even joked at the end of the show that she finally has amortization for her home (referring to the talent fee that she’s set to receive for her two-day gig). 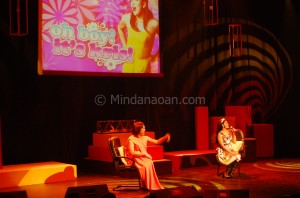 Last but definitely not the least — Jon Santos (quick fast fact: Jon is a certified Mindanaoan!) Jon, who recently admitted that he got married to his longtime gay partner in Canada, shined in his classic, infamous Vilma Santos and Vicki Belo impersonations. There was no doubt that Jon was the “lead” comedian of the night. He was just so amazing! He connected with the audience (in fact, he connected so well that two men sitting along the front row kept on laughing like wild hyenas) and he was not afraid to adlib. Actually, there were some technical glitches during the show (there were some images that didn’t show up on the wide screen and the “Bathala” – voiced over by Phillip Lazaro – seemed to have forgotten to give Jon the cue) but Jon “saved” the segment. 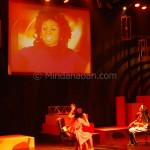 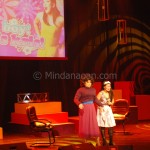 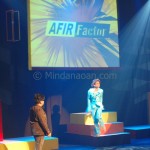 Still, even with the stellar cast, there were also some jokes that didn’t really sit well with the audience (most probably because we’ve heard them before and the only thing that was “different” was the way it was delivered or probably because the audience that night didn’t like “R 18” jokes…there were some during the show). The spoof on Vicki Belo (Vicki Bolo that night), for instance, had quite a few jokes that we either have read on text messages or in the Internet (although I must say that spin on Vicki having a so-called previous relationship with Manny Kawayan – spoof on current competitor Manny Calayan – was amusing). The part where they also made fun of celebrities’ photos was a bit of a drag. Good thing Jon as Vicki looked pretty and flawless and he delivered his lines so well that it was probably the best “Spooftacular” segment that night. 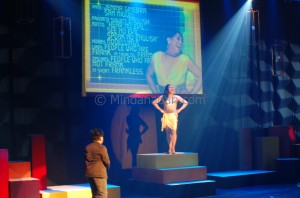 Some segments also seemed to be just mere “fillers.” The spoof on Charice Pempengco (played by Candy as one “Charos”) was all right but needed more “meat.” The audience already laughed at how Kris can be annoying when interjecting and at how funny Jon can be as Oprah Winfrey but that was already it. Charos’ character just kept on crying and there was nothing else that I found funny anymore. There were also a lot of lines that didn’t elicit laughter at all. They were probably amusing for some, though. Amusing but not funny. There were also some sarcastic tirades (like the part where Candy’s Betty character supposedly hit on the “President” for being pangit/ugly…but she quickly added that she referred to the “President of their Homeowners Association.”)

The show just got a fresh breath of air when Sweet came out as Janina and Jon as Vilma (with her trademark “Two glasses a day!”). They had really funny spiels. 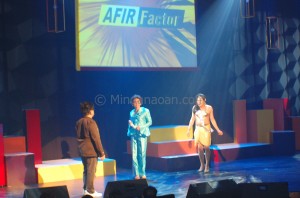 All in all, I could say that the “Da Spooftacular Showdown” is worth watching but only when you have extra money. I can’t consider it as a “never to be missed” show (you can probably have the same kind of fun in stand up comedy bars) although I must admit it had its highlights. Actually, my first reaction right after the show was, “Okay lang.” Still, if you’re a huge fan of Jon, Sweet, Candy and Pokwang, then you should watch since it will take you really up close with them. After all, it’s a big treat to watch seasoned comedians do what they know and do best. Also (and most importantly) if you’re just a sheer fan of Filipino ingenuity and comedic talents and you want to support our local artists, then watch. “Da Spooftacular Showdown” can truly take your blues away…at least for two hours. 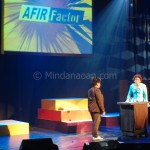 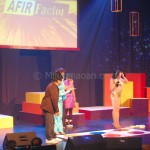 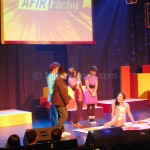