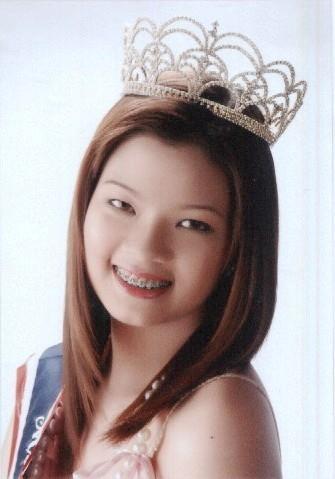 I was pleasantly surprised to see our “Baby South” during the press presentation of the official candidates of this year’s Binibining Pilipinas 2009 pageant. “Baby South” refers to Priscilla Mae Navidad, a 17 year old Dabawenya. I met Mae a few years ago in Davao City, Mindanao. I was helping organize the Davao leg of the nationwide “Rainbow Tour” of premiere Filipino band South Border and after the concert, I was also selling copies of their award-winning platinum CD, “Episode III” (yes, I know, major plugging na ‘to LOL :D) Anyways, there was this tall girl who kept on asking me if she could meet Jay Durias (South Border’s musical director and keyboardist) because, according to her, they were cousins.

I must admit, I had reservations at first because after all, there was virtually A MOB of fans there at that time and there was no way for me to tell if her claim was true or not. However, there was just something real and innocent and sincere about her and so I allowed her to enter the backstage. To make the long story short, Jay was even thankful because I let Mae in. It was pala a reunion that he has been waiting for. Now was that cool or what?

Anyways, after that fateful “meeting,” Mae and I have kept in touch. Whenever South Border has a concert in Davao, we always meet before the show, chit chat as if there’s no tomorrow and together welcome our favorite band with shrieks and shrills. The last time we saw each other was during Jay’s solo concert at The Venue (Mae already won the Miss Teen Philippines pageant at that time). A few months later, she entered the Pinoy Big Brother Teen Edition reality show (ABS-CBN Channel 2). She was tagged as the “Deaf Dreamer from Davao.”  After her PBB stint, we got in touch through text and even planned a get-together. Unfortunately things just got so busy – we were both busy traveling – she for her PBB related concerts and I for my business and work. And now, I learned that she entered the Binibining Pilipinas 2009 pageant! Wow, I feel so old LOL Ah, our baby Mae is really all grown up!

Anyways, I wish her good luck. Let’s hope another Mindanaoan beauty captures the crown this year!

Here are the official 24 candidates of the Binibining Pilipinas 2009: