First of all, we should not call it “Maguindanao Massacre” anymore. We should now call it “Ampatuan Massacre.” Ampatuan is the specific place where the mass graves were found. Maguindanao is the province here in Mindanao. 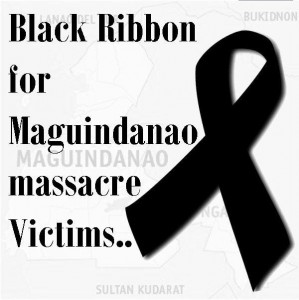 Secondly, to fellow journalists out there (especially those from Luzon) who make the constant mistake of treating Mindanao as one “lawless island,” (come on, you know who you are!) please…please be extra careful.

Maguindanao IS NOT Mindanao.

Mindanaoans like myself have been doing our best to help keep our place peaceful and safe. Unfortunately, like any other area, there are people who refuse to obey the law and think that they are above it. These people do not represent the entire island of Mindanao.

One tiny yet misleading description of our island can result in so many negative effects. So please…if you can…don’t look at Mindanao as if it’s the most dangerous place in the world.

Thirdly, I would like to encourage all of you to please say a prayer for all of my fellow media practitioners who have become victims of such heinous crimes.

Please pray for these media men killed in the Ampatuan massacre. Thanks to CenterLaw, I got this list of the names of journalists killed in the brutal Ampatuan massacre last November 23, 2009. So far, the list consists of a total of twenty seven (27) media practitioners who were killed at that massacre including vernacular weekly Periodico Ini’s entire staff pool. Reports say that there may be more than 35 media men.

May God bless their souls and may God’s healing hands touch their bereaved loved ones.