When my professional wedding photographer-brother Bon told me that I was to serve as one of his 2nd photographers in a wedding to be held in Ozamiz City, I need not think twice. I haven’t been to Ozamis City yet and I’ve always wanted to visit the place. For one, I’ve always been curious of the place and of the many things I’ve heard about it. Secondly, any road trip around Mindanao is always a welcome thought for me. And thirdly, any chance for me to be a wedding photographer is always great news.

Together with fellow photographer Onat, the video coverage team members and Bon, we left Cagayan de Oro City for Ozamis City last January 7, 2010. From CDO, we traveled towards Iligan City (2 hours from CDO) and then onwards to Kolambugan, Lanao del Norte (about an hour after Iligan).

In Kolambugan, we boarded one of those Roll On, Roll Off (RORO) ferries at Mukas Sea Port. Mind you, the RORO ferry had a large airconditioned area with cushioned seats for passengers and even a few tables where passengers can eat or have coffee (like we did :D) From Mukas Port to Ozamiz City, we only paid P20.00 per person and the trip was pretty fast. It only took us about 20 minutes!

Here’s a photo I took at Mukas Port using my cellular phone: 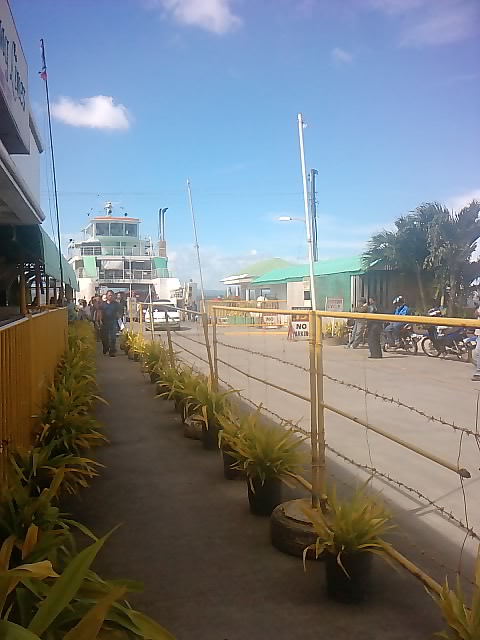 When we reached Ozamiz City, some of the few things that I noticed right away were — mode of transportation was either via tricycle or side car, there were a lot of seafood vendors (crabs are sold really cheap in this area), streets were a bit narrow and get this — there were so many lechon manok booths all over the place! It seemed every street had at least two lechon manok sellers 😀

The team then proceeded to Clarin. We were then billeted at a beautiful beach resort that also doubled as a post-nuptial location for Garry and Quennie, Bon’s client-couple. Mindanaoan will share some of the shots we took of them in the coming days.

In the meantime, here’s a very brief preview of the fresh, fun, funky shoot we had near the Cotta Shrine (yep, we attracted a huge crowd at the time!):

Garry and Quennie – after the wedding from Irene A. on Vimeo.

Ozamiz City, by the way, is a 3rd class city in the province of Misamis Occidental, Mindanao. Named after Jose F. Ozamiz, this city is officially spelled with a “Z” in its last letter and not with an “S.” From Ozamiz, you can reach Tangub City within 30 minutes, Oroquieta City within 45 minutes, Dipolog City in about 3 hours and Pagadian City in about 2 hours.

What about you? Have you been to Ozamiz? How was your experience like?