Mindanaoan has always been very curious of Iloilo City, the largest province in Panay Island. We’ve all heard the many stories about this beautiful city – just how malambing Ilonggos are, just how fascinating the tourist sites are, just how delicious their delicacies are, just how booming their business sector is and just how warm and friendly the people in Iloilo are.

So when I recently got the chance to travel to this beautiful city located at the Western Visayas Region, I no longer had second thoughts. Off I went to the city formerly called “Irong-Irong.”

From Cagayan de Oro City, Mindanao, I took an airplane ride going to Cebu City (roughly 30 minute ride). From there, I took another flight, this time from Cebu to Iloilo (roughly 50 minute flying time). If you’re in a bit of a hurry, taking plane rides is the best and easiest way for you to travel from Mindanao to Iloilo. Of course, it may be a bit more expensive than taking the RORO ship or a bus.

When my plane finally landed on Iloilo soil, this welcomed me: 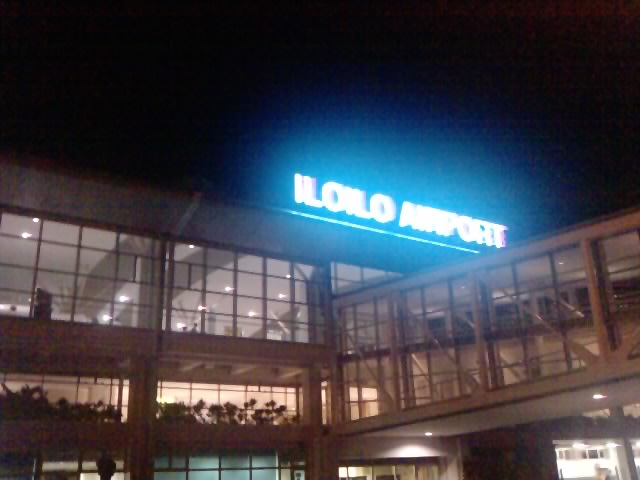 Now I did a little bit of research before my trip and I got the impression that the Iloilo City airport is really very far from the city proper. In fact, a lot of blogs say that it may take one roughly 40 minutes to travel from the airport to the downtown and that you may need to pay about P350.00 each. Well, I must say, my travel time was only about 15 minutes and the taxi driver only charged me what’s on the meter plus P50.00 All in all, I only paid P210.00 Not a bad deal, methinks.

Now these are two low res photos I took inside the airport. I was waiting for my baggage at this time: 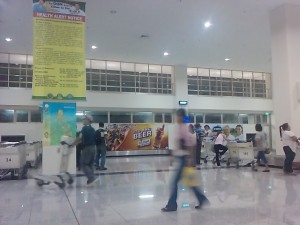 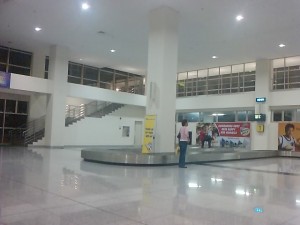 The airport is reminiscent of the NAIA 3 terminal. Of course, Iloilo’s version is a lot smaller but at least it’s clean and well-maintained, based on my observations. What I just found a bit alarming, though, was the fact that our baggage tags were no longer checked. The guards no longer verified if the passengers were carrying the right luggage. I found that odd.

No one was there to fetch me from the airport so I basically took care of myself. What I did was just follow the huge sign that said “This Way to Metered Taxi,” a lady asked me where I wanted to go and requested that I pay the amount on the meter plus P50.00 I said yes right away! Good thing the taxi driver, who had a very rich Ilonggo accent, was pleasant and even made kuwento about the city.

By the way, there are A LOT of “fixers,” “middlemen” or however you wanna call them at the airport. They will offer their vans, taxis, multicabs and others. Just know that I merely paid P210.00 for my fare so as much as possible, refrain from paying P500.00 up. I have a colleague who flew in a few hours later than I did and he was made to pay P500.00 That was way too much!