So, YES, finally! Mindanaoan, her brother and mom finally got to visit Dahilayan Adventure Park in Manolo Fortich, Bukidnon – home of ZipZone Bukidnon zipline, reportedly the longest dual cable zipline in all of Asia! We finally managed to visit this Mindanao tourist destination, which is fast becoming a favorite of thrill and adventure seekers, in time for my brother‘s birthday.

Actually, we’ve been looking forward to trying out this Bukidnon zipline adventure for months but we only had the chance this most recent weekend. Also, quite unfortunately, my two other brothers couldn’t come with us so it was just me, my brother and my mom. Nonetheless, my brother and I were so excited to try the much-talked about 840 meter zipline, considered the longest dual cable zipline in Asia. 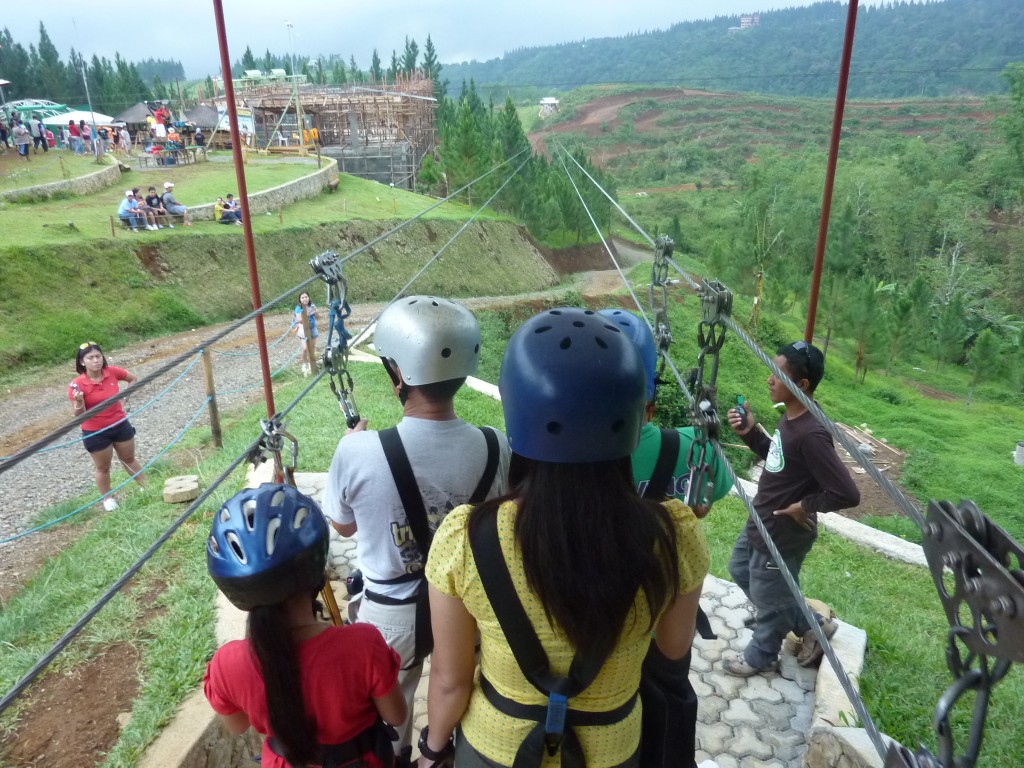 This wasn’t our first Mindanao zipline adventure, though. My brothers and I already conquered the Xcelerator, the longest speed zipline in Asia.

So anyways, going back to Dahilayan Adventure Park – if you’re coming in from Cagayan de Oro City, it’s about an hour and a half away (about 45 minutes from CDO proper to Alae, Manolo Fortich, Bukidnon and then another 45 minutes from Alae to Camp Philips to Barangay Dahilayan). Read down below for instructions on how to reach Dahilayan ZipZone.

It’s highly advisable to bring your own vehicle to reach this so-called Asia’s longest Dual Cable Zipline park because in our case, our trip was a major case of “Are We There Yet?” You see, we only managed to rent a multicab (P1,000.00 from Alae to Dahilayan and vice versa) and we did not expect Barangay Dahilayan to be THAT FAR and the roads to be that dusty and rocky! So yes, you could just imagine how seriously covered in dust we all were when we arrived! By the way, as much as possible, stay away from locals who try to offer rides going to the zipline park aboard a mere motorcycle (“habal-habal” rides). Apart from the fact that most, if not all, of these motorcycle drivers do not have helmets on (nor can provide one for you), it’s too impractical to merely ride a motorcycle going to the zipline park. If you’re traveling as a large group, try and rent a multicab or a van (there’s a TODA alley at Camp Philips near the soccer field). Prepare to pay a minimum of P1,000.00 (the rent is already good for an entire day).

We arrived at around 1:30PM. It was a Sunday and there were a lot of people in the park. My brother immediately signed us up at the flight center. Unfortunately, he was told that we could only avail of the 320 meter + 150 meter zipline rides. Apparently, we no longer “made the cut” for the 840 meter zipline!

That really got me curious, disappointed and a bit mad, of course. After all, the 840 meter zipline was the main reason as to why we visited this Mindanao zipline tourist destination in the first place. So I asked to speak to the manager. A few minutes later, he arrived, asked what our concern was. I asked him why the 840 meter zipline was already deemed “close” when accordingly, the park was only supposed to close at 3. I told him that no such information regarding “cut-off” times was found either on their website or at the park premises. Ravi, the flight operations manager, explained that since it was a Sunday and that there were a lot of people who signed up for the 840 meter “flights,” they imposed a “cut-off” time. I told him that while we were disappointed, we acknowledged that we couldn’t do anything except include that incident in our reviews/write-ups about Dahilayan Adventure Park. After all, Mindanaoan also writes for the only interactive blog about Bukidnon!

Good thing there were no accidents involving ziplines at Dahilayan Adventure Park in Bukidnon that day or else that could have been pure AMAZEBALLS!

So moving on…zipline isn’t the only feature that you may like at this extreme adventure park in the Philippines. They also offer zorbing, water rafting, a ropes course and wall climbing. They also have a Forest Park where kids can play and families can hold picnics at. There’s a playground and lots of picnic tables at Forest Park. There’s a P50.00 entrance fee per person, though.

Check out the huge pine trees at Forest Park. A lot of of out-of-towners loved the very cool breeze under these heavenly trees. My brother, mom and I spent about half an hour here as we waited for our turn at the ziplines: 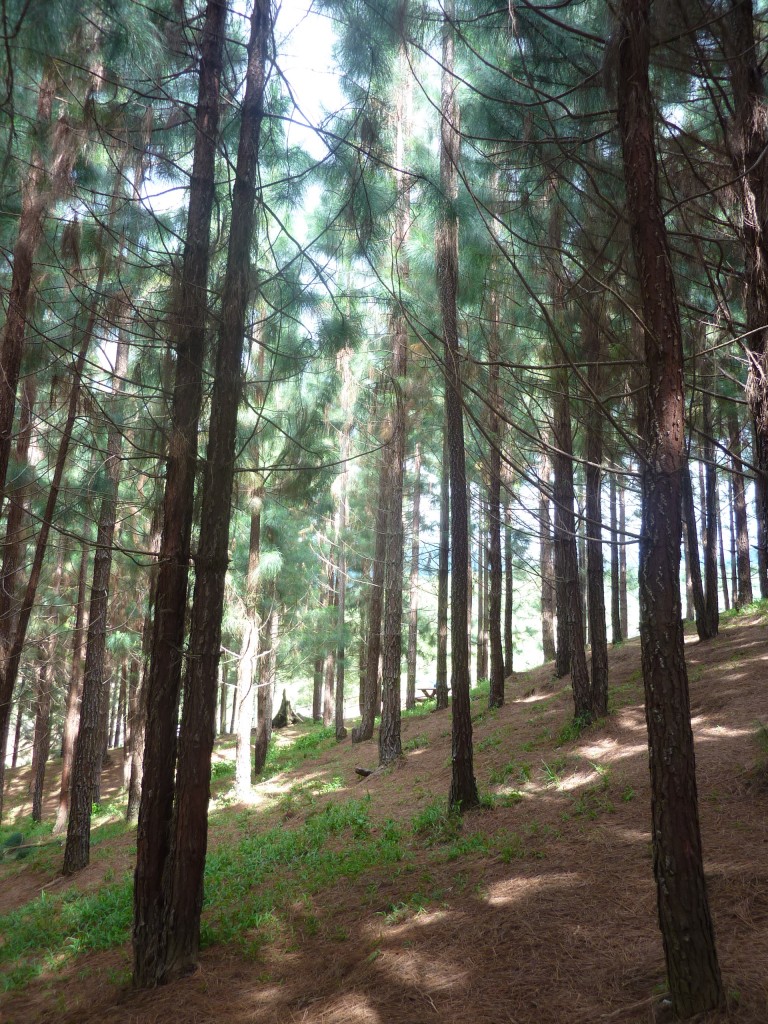 As our turn at the 320 meter zipline drew near, my brother and I decided to go back at the “flight center” (where the sign ups were done and where a small souvenir shop cum canteen can be found). Ravi, the flight operations manager, was there and asked me if we already had our turn at the ziplines. I told him, “no, not yet.” A few minutes later, he came back and shared some good news – we could be accommodated for the 840 meter zipline after all! He explained that the “flights” at the 840 meter tower were about to finish earlier than expected. Ravi’s news really made my brother very happy – especially because it was his birthday after all!

And so my brother eagerly signed up for the 840 meter zipline adventure. Ravi even managed to give us an unexpected discount of P200.00 Thanks man! 😀

Now I can really say that it ABSOLUTELY PAYS to ask and be assertive, yes? 🙂

The weather was already starting to get gloomy at this point. There was fog, too, and signs of heavy rain.

Soon enough, we were called to ride the safari vehicle. It was time! Armed with our safety head gear, big smiles and intestinal fortitude, we braved the fog and muddy path leading towards the launch tower. Heavy rain was already pouring down.

Check out the launch tower for the 840 meter zipline: (the white dots are due to the raindrops and fog) 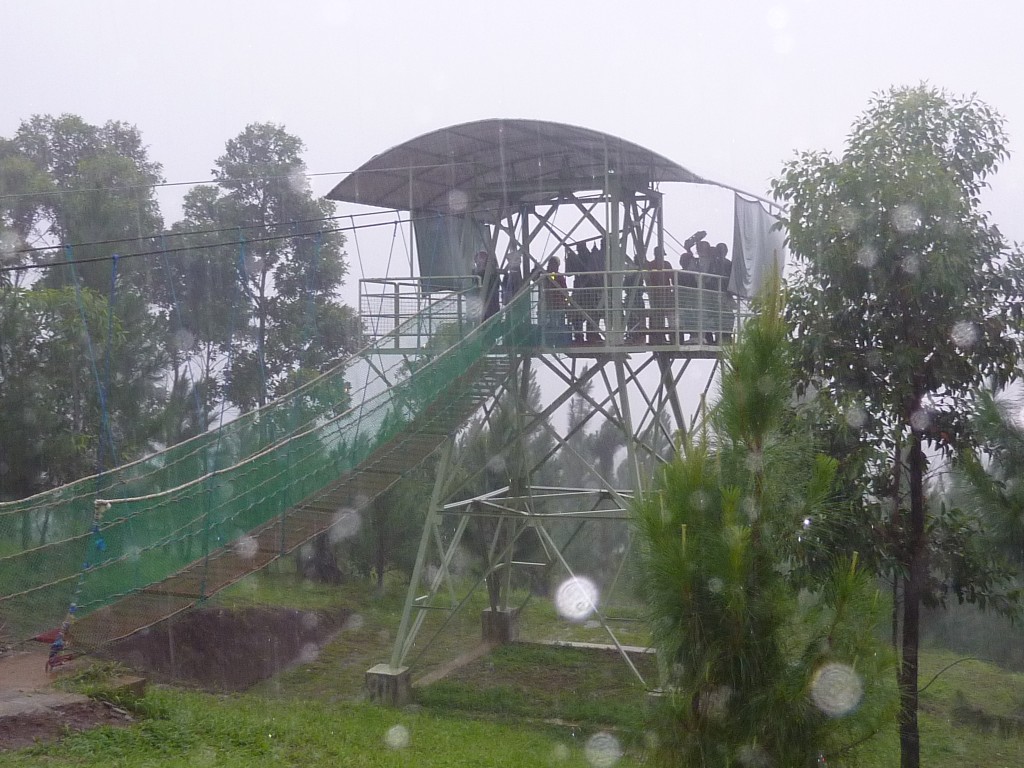 Before you could go to the launch tower, though, you need to wear your head gear, eye gear (goggles!) and padded gear for your body. Friendly Dahilayan Adventure Park staff members will assist you.

Here are some tips for you to remember before you go zip, zip, ziplining! Tips before you go on a zipline adventure at this Bukidnon zipline Dahilayan Adventure Park: 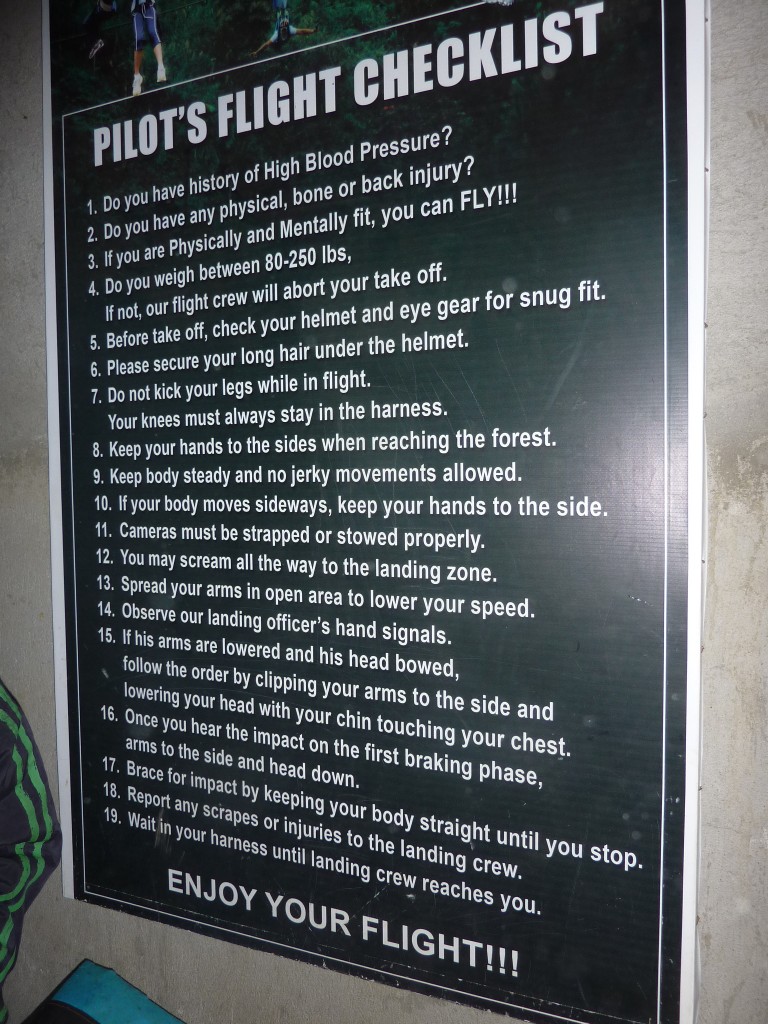 Now here’s the view from the launch point: (seriously, doesn’t this view thrill you?) 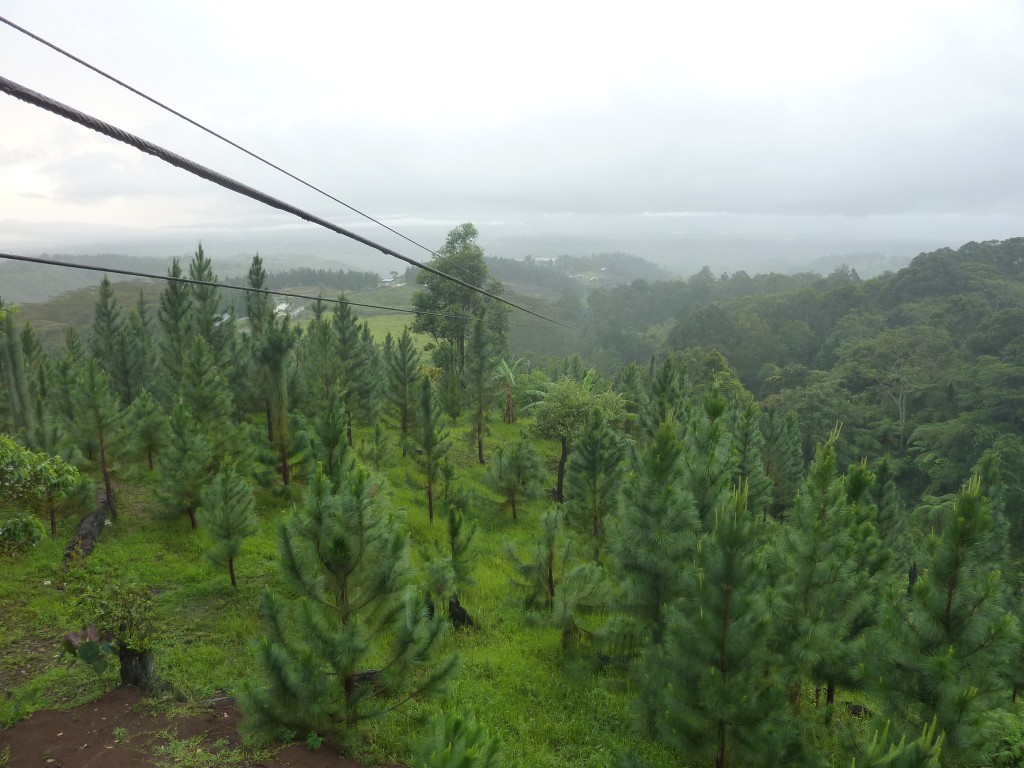 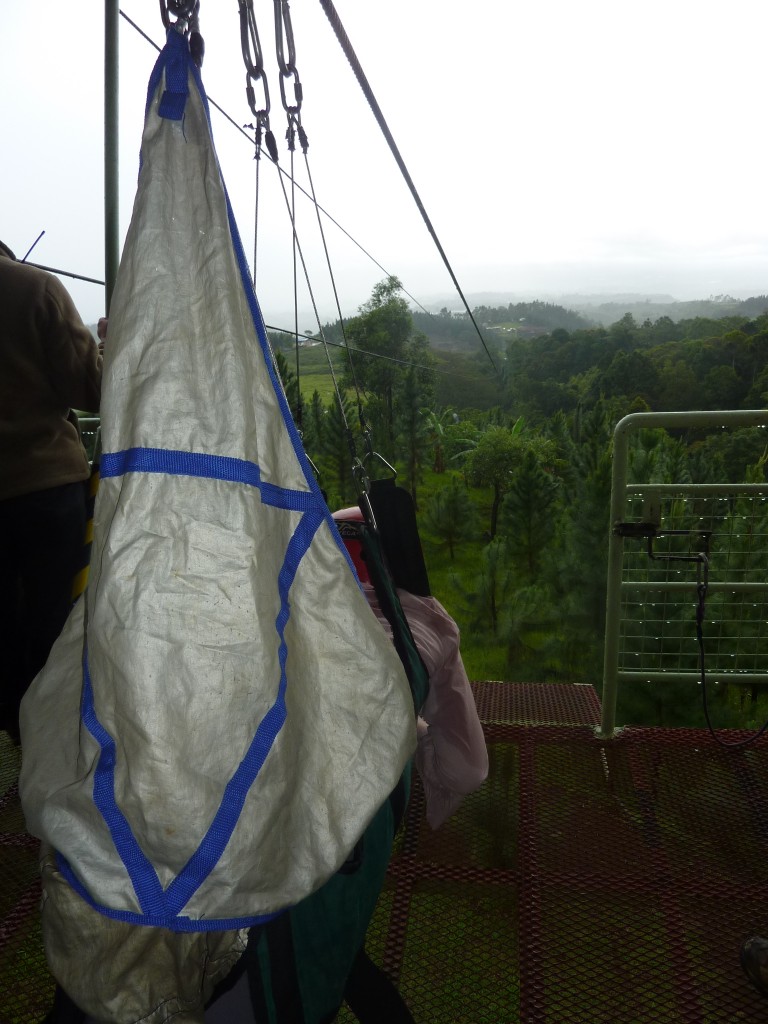 Soon enough, it was OUR TURN to fly! And boy, I tell you, our 840-meter “flight” was absolutely worth the money!

Needless to say, Mindanaoan highly recommends this zipline adventure! Will definitely recommend this to my BukidnonOnline, Mindanaoan and Asia Travel readers!

Here are some fast facts about this zipline adventure in Northern Mindanao:

How to get to ZIPZONE Extreme Zip Line Adventure | Bukidnon zipline – Barangay Dahilayan, Manolo Fortich, Bukidnon is about an hour’s drive away from Cagayan de Oro City, Mindanao. As soon as you reach Alae (one landmark would be the Alae footbath…all vehicles entering the Bukidnon province will need to stop at the footbath area), take note of a rotunda. You will see this before you reach the Alae bridge. Take this road. (Turn right at the rotunda) Go straight ahead until you reach Camp Philips (this is where most Del Monte employees live). That’s about a twenty minute drive. Now from Camp Philips, drive down further until you reach Barangay Dahilayan. It’s another twenty minute drive. You’ll pass through pineapple fields and a rocky road. As soon as you reach Barangay Dahilayan, you will see an outpost where you’re supposed to pay P25.00 as “barangay fee” (for the maintenance of the road, if I’m not mistaken). Take note of the markers leading you towards Dahilayan Adventure Park, home of the longest dual cable zipline in Asia, located in Bukidnon, Mindanao.