It was an honest mistake, according to Rebecca Thompson of the US Embassy. Still, the damage has been done. Now what I’m just hoping for is that the person/s responsible for this fiasco be dealt with accordingly.

Instead of the blue band atop the red band, the red band can be seen as the one atop the blue one — and we all know what this means — it suggests that we’re “AT WAR.”

“This was an honest mistake. The U.S. treasures its close relationship and close partnership with the Philippines which were demonstrated tis past week during President Aquino’s trip to the U.S., with the signing of the MCC Compact, the US-ASEAN meeting, and the meeting of our two Presidents that followed it,” according to US Embassy’s Rebecca Thompson. 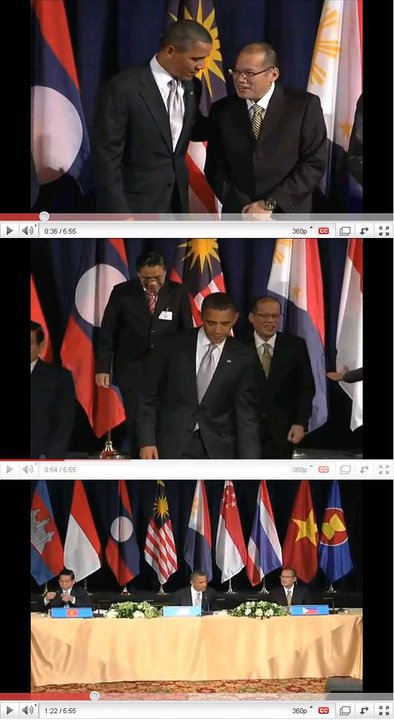 According to USec. Manolo Quezon (who also sent Mindanaoan the reply from Ms. Thompson via Twitter), protocol noticed the snafu but nothing could be done in time. The US State Department handled the event.

Quezon also says that security was very tight and that the leaders who participated in the event went straight in and that the event started immediately.

So now I wonder if something can be done not only to the person/s responsible for the snafu but more importantly, so that nothing like this will ever happen again. Because whether this happens everywhere or not, this is still embarrassing for the Philippines. And, really, for a new President who’s only been in office for less than 100 days.