I did. Together with my family, this blogger from Mindanao exercised her right to suffrage today, October 25, 2010 – the day of the Barangay and Sangguniang Kabataan (SK) elections. Armed with my Panasonic Lumix digital camera, my Flip Mino HD, my Nikon D40, ballpen, voter’s ID and ever trusty Blackberry, I went to my polling precinct at around 9:30 a.m. I looked like I was ready for war.

As usual, I spotted several odd things during my trip to my polling precinct:

1. There were only a handful of voters. Ergo, low voter turnout.

3. I didn’t spot any policemen or security personnel when we entered the polling area. I did see one when we were about to go home. He was in his policeman uniform, smoking his lungs off at a corner and busy talking to some folks. So much for being on your toes during a very important event.

4. I noticed that a lot of people, who have apparently finished voting, still loitered around the polling precincts. My mom even told me later on that she thought she heard someone from the outside of the room remark, “Ay wala silay kagawad” (“They didn’t vote for any kagawad”) Apparently, what some of these loiterers merely did was observe each voter as they cast their vote.

5. A sales agent of Globe Innove was busy distributing leaflets/flyers about their Wi-Max service at the entrance of the polling precincts. While this probably isn’t illegal, I find it very, very tacky. Boo!

And ah yes…the oddest thing I noticed today…one of the names of the candidates for barangay chairman in our area was printed in BOLD letters. His competitor’s name was only typed in regular font.

What does that say? Makes you go “hmmm,” yes?

Here’s a photo of the ballot box in my polling precinct: 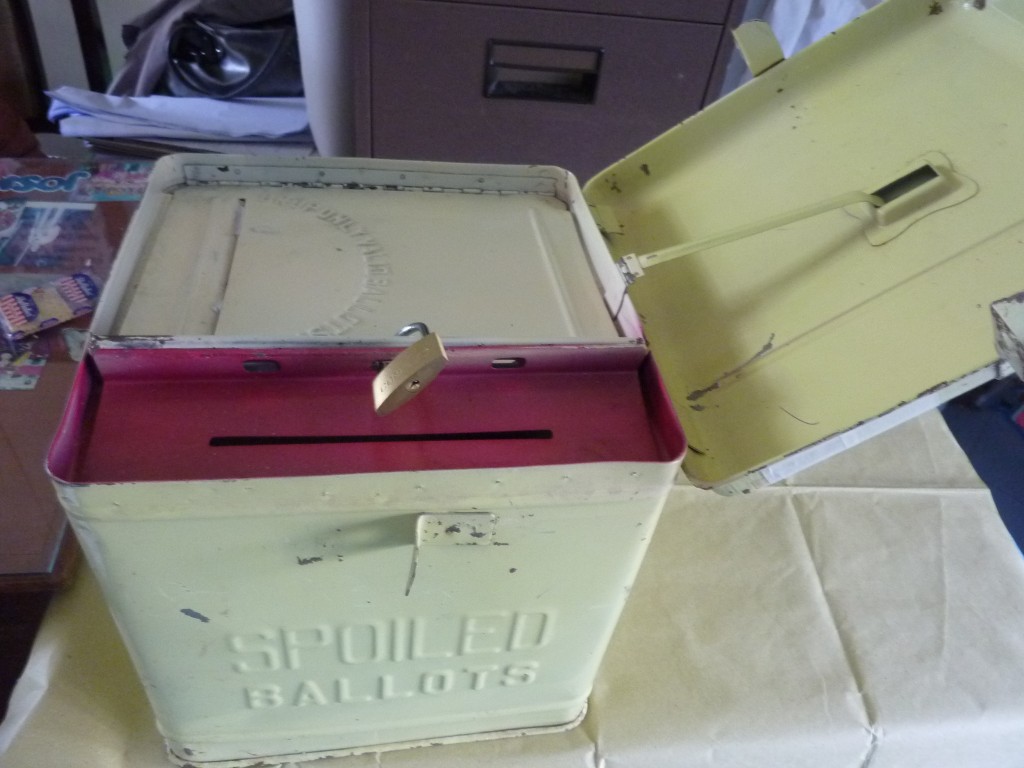 I also tweeted some of my thoughts today and the most recent tweet-exchange got a bit interesting. You see, one Twitter pal said that he wasn’t able to register, hence, he wasn’t able to vote. He then asked, “does that make me an irresponsible citizen?”

Another Twitter pal commented that voting is a right and not an obligation.

Another agreed and even said that NOT voting is also a way of exercising his or her right.

Personally, while I DO AGREE with both arguments, I find that a bit sad. Electoral exercises, I believe, are every Filipino’s chance to participate in the whole democratic process. Why skip on that chance? Why waste your power to choose?

You know what a lot of people say — if you didn’t vote, then you don’t have the right to complain.

WHAT ABOUT YOU? WHAT ARE YOUR THOUGHTS ON THIS?