For budget conscious Mindanaoans like me who often travel to Manila, it is but imperative to stay in a value hotel that offers not only comfort and safety but an ideal location as well. Although I do put a lot of weight on the price of a hotel room, I don’t mind paying extra if I see that I get my money’s worth. I also prefer hotels that are near public transportation options. Enter GoHotels.ph – a relatively new hotel located along EDSA Mandaluyong. For the uninitiated, EDSA, formerly known as Highway 54, is the main highway of Metro Manila here in the Philippines. It’s also the same circumferential road where the Metro Rail Transit (MRT) passes through.

GoHotels is the sister company of budget airline Cebu Pacific. Hence, it’s no wonder that the said Manila budget hotel operates the same way: the earlier you book, the better chances of getting the lowest rates. Earlier today, I did a mock booking for a room on August 2011 and the least priced hotel room I found was P688++. (Unfortunately for me, though, I had to pay P1,888 for my first night at GoHotels. The next two nights were billed at P1,288 per night na. You see, I booked the hotel rooms just a few days before I had to leave for Manila to attend a special wedding.)

From the airport: It’ll take you roughly 20 minutes to reach the hotel. GoHotels is located right beside Robinson’s Forum along EDSA Mandaluyong. It’s also walking distance away from the Boni Avenue – MRT station.

So now the big question is — how was my GoHotels.ph experience? (check out the photos I took of my room below!)

I won’t lie — I thought GoHotels had its good points but it certainly also had its bad points.

1. Nice bed and comfortable pillows. The room I requested for had a queen sized bed (you also have the option to avail of two single beds), two ordinary pillows and two chiropractic pillows. I also specifically requested for a room that had a window and one that had strong WiFi signal. Luckily, I was assigned a room that was right beside the WiFi router! My room also had windows and I had a good view of EDSA, of Pasig River and of the Makati skyline. Except for the faint trace of sound of the train as it passed by, I hardly noticed any noise coming from the busy highway. By the way, if you’re a laptop-lugging traveler like me, you should insist on getting a room that’s near the WiFi router or else you’d be forced to stay at the lounge just to surf the web. 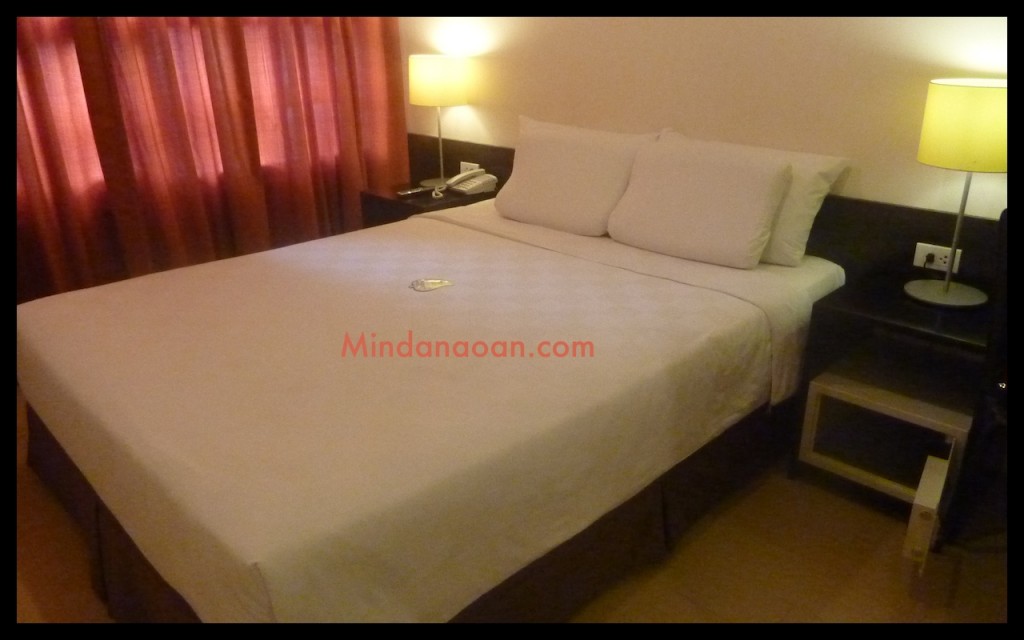 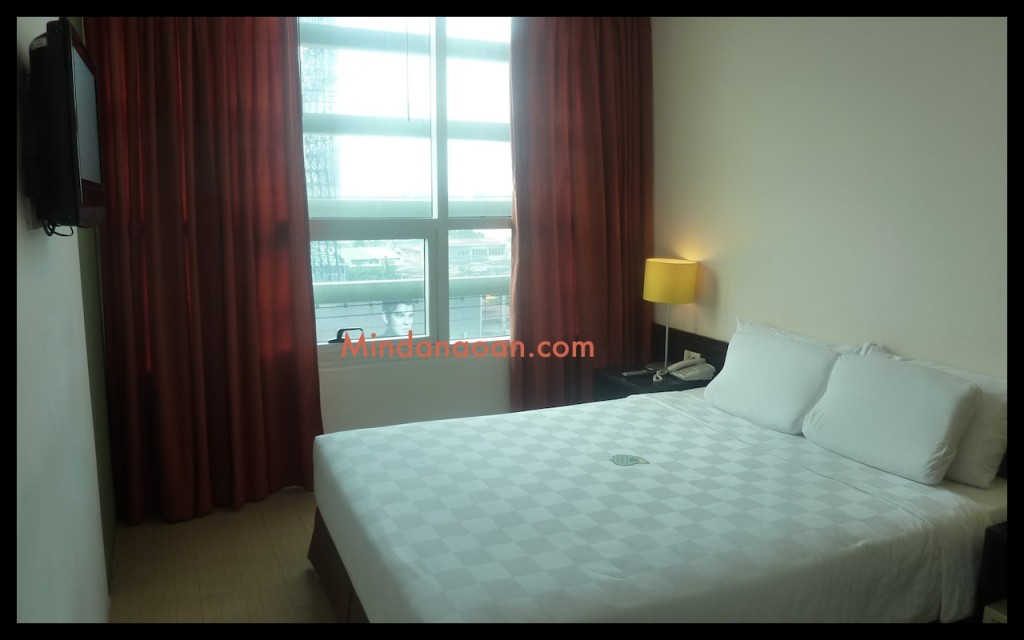 2. I liked the fact that my room had free wireless internet connection access, had an in-room safe and a small nook where a small desk and a chair can be found. There was therefore no need for me to go outside just to work or surf the net. My room also had a cool 22″ LCD cable TV. I also liked that my room had two bedside lamps. The room also had a keycard lock system and an energy saver switch.

3. For the bathroom – there was a handheld showerhead and a rainshower type. Hot and cold rainshower. There were two bath towels, a foot towel, a small sachet of shampoo and a single use bar of soap. The toilet had the full and half flush options. There were two mirrors, too – one inside the washroom and another, a full length one, can be found right outside the washroom. There was a small sanitary bag and a roll of tissue paper. 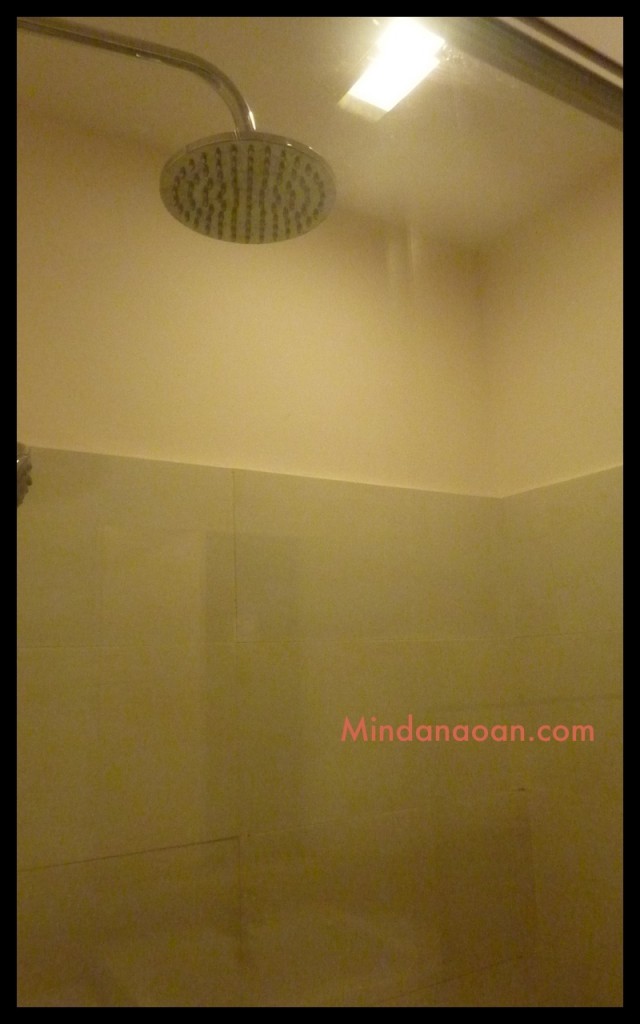 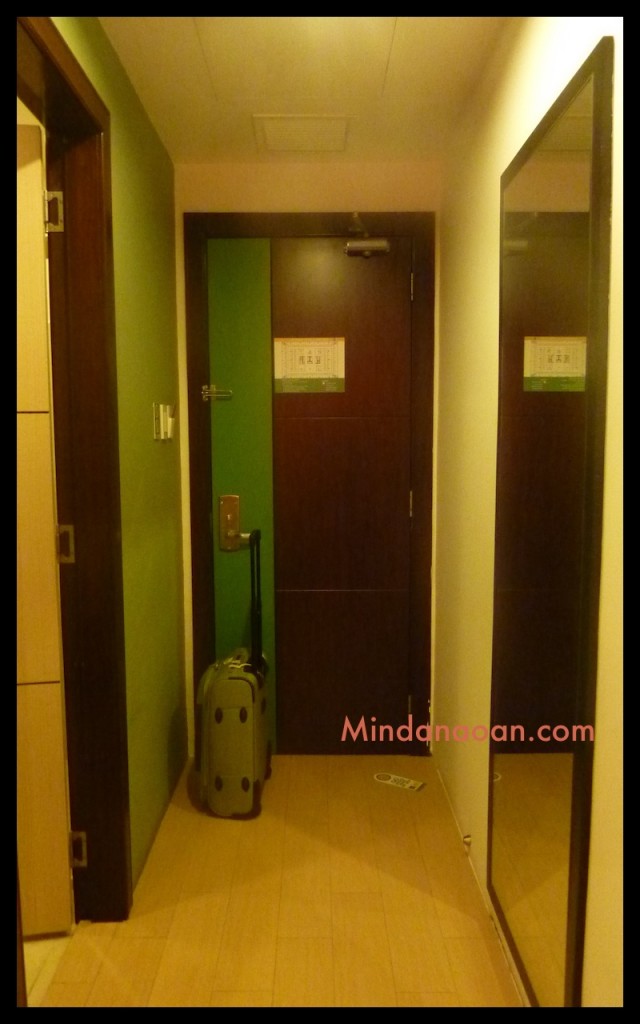 4. There were four (4) 220V sockets – two of which were used for the bedside lamps. What I did was unplug one of the lamps so I can use two sockets at once — one for Usher (my Macbook) and one to charge my mobile phone.

5. The hotel had a strict “No Smoking” policy. I liked this! There was also a Tokyo Cafe right beside the lobby so for those who can’t start their day without having breakfast, you can eat there. Meals are affordable. Also, there’s a Mini Stop convenience store about two doors down from Tokyo Cafe.

6. The location was pretty good. It’s along EDSA so it’s easy to ride a bus. It’s also just walking distance from the nearest MRT Station (Boni Ave) so it’s also easy to ride the train. Because GoHotels is beside Robinson’s Forum, you can also just ride a cab from the mall’s designated taxi stand. GoHotels is in Mandaluyong – it’s in between Makati and Ortigas, Makati and Quezon City. Now for those who prefer to go to a bigger mall, GoHotels.ph is near SM Megamall and Shangri-La Plaza.

Now for the bad:

1. I did not like the fact that the GoHotels.ph management made all of their paying customers wait until the strike of 2 PM before we can all check-in. You see, I arrived at the hotel at around 1:10 PM and because I was already tired, I thought I could already avail of a room so I could rest. No can do. Apparently, even if there were available rooms, it was their company policy to make all of us (there were around 15 of us already at the lobby) wait until 2 o’clock in the afternoon. While it’s true that it’s their company policy, I was hoping that they could bend the rules a little especially if there were already available rooms and if there were tired and weary guests. I must admit, in the countless times I’ve checked in hotels here and abroad, that was the first time that I was made to wait even if there were already available rooms. So obviously I don’t agree with their claim that their hotel’s a “fun and friendly” one. No sirree.

2. If GoHotels’ check-in time was at 2pm, their check-out time was, quite curiously, an hour earlier than most check-out times. While all other hotels implement a 12 noon check-out time, GoHotels Philippines has an 11 a.m. check-out time policy. Which makes me think — does this mean that it takes their room cleaners three hours to prepare a room?

3. I have more bad news — you CANNOT leave your luggage at the hotel for free. If, let’s say, you need to go somewhere first before your flight (perhaps go to Megamall and buy a box of Krispy Kreme for pasalubong, eh?) and you want to have your luggage stored, GoHotels.ph charges P50.00 to P100.00 PER LUGGAGE. It does not matter whether you just intend to leave your baggage for minutes or hours. YOU NEED TO PAY. So on this regard, GoHotels.ph has poor customer service.

4. Elevators were SLOW. There were two elevators and although they were roomy, they were also painfully slow. I could only wish that they installed high speed elevators instead.

5. I’m afraid that the room cleaners did not clean the bathroom well. You see, on my second day at the hotel, I mistakenly dropped a glop of hair conditioner on the bathroom floor. Unfortunately, when I came back later that night, I noticed that the room was already made up but the glop was still there! Yikes.

6. There were telephones inside the room but they were only good for room-to-room calls.

7. I found their 11 a.m. to 1 a.m. room cleaning policy a bit odd. You see, if you wanted to have your room made up, you MUST hang the make-up room sign on the doorknob anytime between 11 in the morning until 1 in the afternoon. Failure to do so will mean that your room will not be cleaned that day. Now if you insist that your room must be cleaned, you must pay a whopping P500.00! Take note of this.

8. Don’t expect a bell boy to help you out with your luggage. No room attendant will also accompany you to your room and help you get settled in. Basically, it’s a “help yourself” type of hotel.

Which brings me to one of my many questions — why do they consider this one a HOTEL? Considering the rules, regulations and the way they run the place, GoHotels is more like an inn or pension house or hostel.

I guess staying at GoHotels is worth it if you only get to pay the P588 or P688 price. However, if you end up paying more than P1,000 or nearly P2,000 for a night’s stay, I say LOOK FOR ANOTHER HOTEL. One that’s REALLY fun and friendly.