The day shall be marked as the 26th year anniversary of EDSA Revolution 1. For fans of top-selling boy-groups Blue, 98 Degrees and a1, however, they will mark it as a day of sure-fire ear-friendly music, live celebrity glitter as a back-to-back-to-back concert of international heartthrobs happens inside the historic Smart Araneta Coliseum in Quezon City come the evening of February 25, 2012.

Presenting “The Greatest Hits Tour” of a1, Jeff Timmons of 98 Degrees and Blue. February 25, 2012, 8 PM at the SMART Araneta Coliseum in Cubao, Quezon City, Philippines. Topnotch concert promoter Wilbros Live has just announced the staging of a star-studded concert entitled, “The Greatest Hits Tour: Blue, Jeff Timmons of 98 Degrees and a1 – Live in Manila 2012.”

Mindanaoan.com also shared that the guys will also be in Singapore on February 28, 2012! 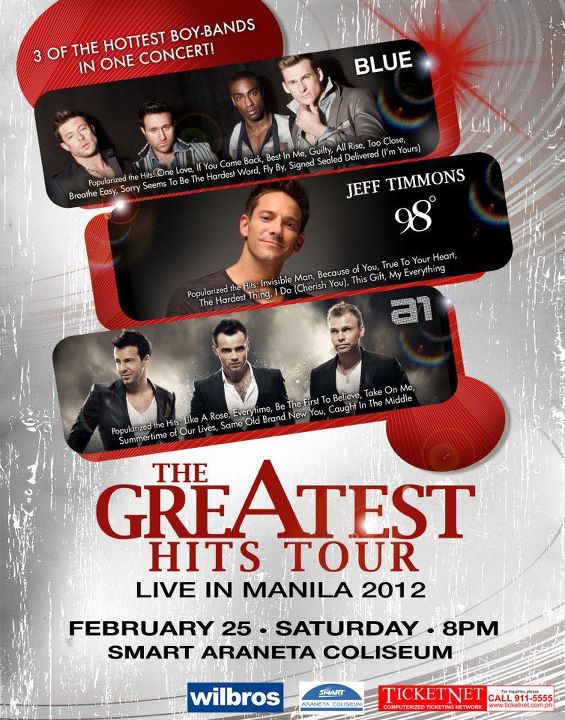 Witness members of these marquee boy-bands perform and serenade you in their flesh. The English pop vocal group Blue is set to deliver their hits, such as “All Rise”, “Too Close”, “If You Come Back”, “Fly By”, “One Love”, “Sorry Seems to Be the Hardest Word”, “Guilty”, and “Signed, Sealed, Delivered (I’m Yours).” The group, comprised of Simon Webbe, Lee Ryan, Duncan James and Anthony Costa, will surely paint the town red.

British-Norwegian group a1 is expected to churn out their familiar tunes. Name it, “Like A Rose”, “Take On Me”, “Ready or Not / Everytime”, “Same Old Brand New You”, “Caught in the Middle” and “Make It Good”. This pop ensemble started making a big splash when their first single, “Be the First to Believe,” entered the UK charts at #6 in early 1999. They had a huge amount of success worldwide with two #1s and eighty top 10 hits. No wonder music fans have believed! Watch out for their newest Christmas track After All It’s Christmas which will hit the airwaves very soon.

For fans of 98 Degrees, you won’t see the group performing. Yet, that shouldn’t matter much as its main vocalist Jeff Timmons is showing up. The group split up years back but its unforgettable R&B, soul, urban and contemporary pop sound lives on through its founding member. He is sure to sing many of their hits like “Invisible Man”, “Because of You”, “The Hardest Thing”, “I Do (Cherish You)” and “My Everything”.