It’s time for the King of Festivals again! The much-awaited Kadayawan Festival 2012 in Davao City is set to take place on August 17 to 19, 2012! The 2012 Kadayawan sa Dabaw Festival will feature the theme: “10 Tribes, 1 Vibe” The 10 Davao tribes that truly celebrate the diversity of Davao City’s cultures are Ata, Matigsalug, Ovu-Manuvo, Tagabawa, Klata-Djangan, Tausog, Maguindanao, Kagan, Maranao and Sama.

The term “Kadayawan” is taken from the Mandaya word “madayaw,” which is a friendly greeting used to explain something that’s good, bountiful, superior or profitable. If you’ll be in Davao for the 2012 Kadayawan, you will for sure encounter this word often 🙂

In Davao City, the Kadayawan Festival is the grandest, most colorful festival whereby locals gather and celebrate life, tradition, culture and ask the gods for good harvest. There are a lot of Kadayawan Festival 2012 events and activities. Stay tuned for the complete list of schedules. You can SUBSCRIBE to Mindanaoan to be kept updated. Or you can join my official Mindanaoan Facebook page.

Also, to give you an idea of what usually happens during Kadayawan Festival, here’s the 2011 Kadayawan sa Dabaw skeds.

In the meantime, check out the new 2012 Kadayawan Festival logo: (what do you think?)

Want to be a part of Kadayawan Festival 2012 in Davao City? You may contact the Davao City local government via their official website. You can also call telephone number (63) 82 227 2500.
Book your flights to Davao City now via Airphil Express!
You can also book cheap Davao City hostels or you can search for a hotel in Davao City below: 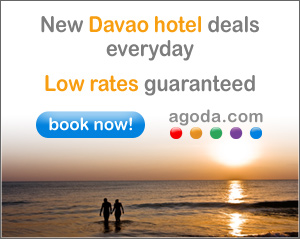