You all know that I’m a big Rivermaya band fan and supporter. That’s why I got pretty sad, disappointed and a bit angry, really, when I found out about this.

Now here’s the catch – I immediately got in touch with the manager of Rivermaya band and he denied that the guys have been booked for this gig. Ugh. The managers of the other bands have also all denied that they’re part of this event! Geez.

Below is the official announcement from the manager of Rivermaya Band. I suggested that he also adds the band’s official website so that the guys’ names will be cleared and that nobody (hopefully!) will be lured into buying tickets! 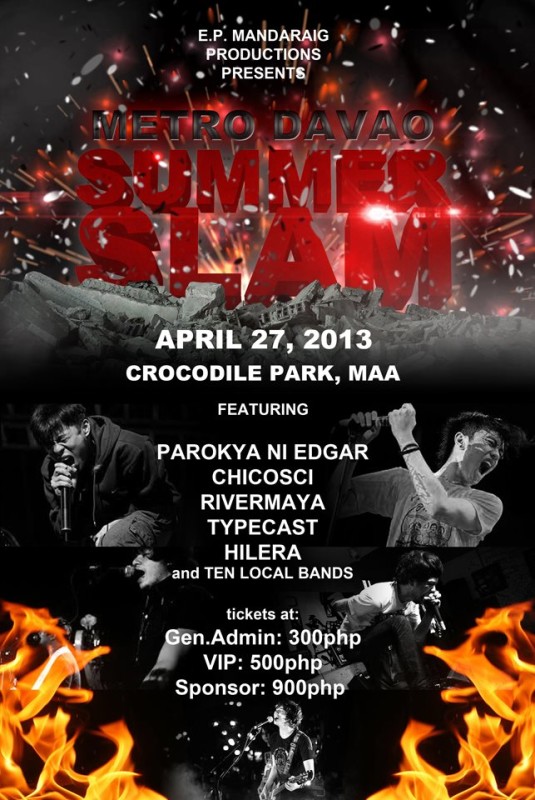 This is to inform residents of Davao that Rivermaya is not scheduled to perform this weekend at the Crocodile Park. Other artists in the lineup such as Parokya ni Edgar, Hilera, Chicosci, and Typecast are also not part of the show. We were never booked for the event to begin with. We’d like to apologize to the fans looking forward to watching us perform. We look forward to visiting your city soon. Please feel free to check our website www.rivermaya.ph for information and other announcements. Thank you very much.

UPDATE: Mindanaoan got in touch with the Davao Crocodile Park management and this is what they have to say:

Metro Summer Slam wasn’t able to comply the necessary requirements of City Treasurers office, so it was cancelled. [sic] Davao crocodile was supposedly their rented venue. In fact, they are to pay crocodile for the cancellation which they made after the date stipulated in the contract. [sic]

I’m pretty sure the last thing the band wants right now is to hear reports of Rivermaya fans in my hometown Davao buying fake tickets.

By the way, Rivermaya band’s manager did say that the guy who runs the production outfit indicated on the poster has explained that some alleged disgruntled ex-employee is behind this. Still, I really hope that no one has bought tickets to this show.

To all my fellow Rivermaya fans – the guys will soon visit our beautiful city so chin up! In the meantime, let’s support Mark Escueta, Ryan Peralta, Norby David and Mike Elgar by buying their newest album, “Panatang Makabanda,” featuring the hit single “Pilipinas, Kailan Ka Magigising?”

You can also help vote for their music video on MYX. Here’s how:

Just in case you missed these: