The Northern Mindanao Wellness and Reintegration Center is located at Barangay Casisang, Malaybalay City. Malaybalay is the capital of Bukidnon and is about an hour and a half away from Cagayan de Oro and 5 hours away from Davao City.

This Bukidnon drug rehab is a product of a public and private partnership. The 5-hectare land along Diversion Road where the addiction treatment and mental health center sits on was donated by the City Government of Malaybalay and the amount was donated by the Friends of the Philippines Foundation, chaired by Chinese businessman Jose Kho. Kho is also associated with Kitson Soriano Kho, the Filipino-Chinese chairman of Hong Kong-based The Kho Group and executive director of UAA Kinming Development Corporation. 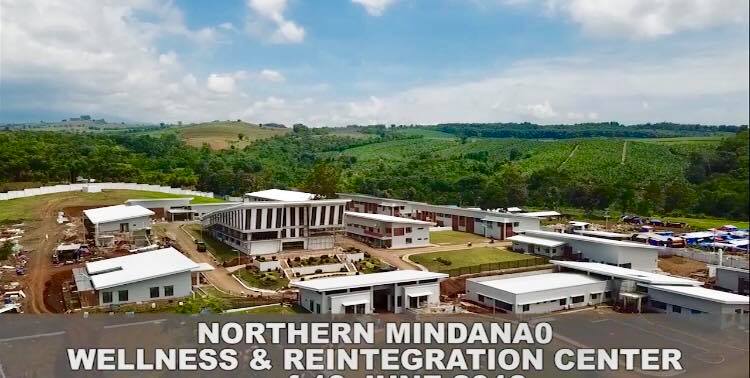 Said to be the largest drug addiction rehab in Mindanao, this has 3 dormitories, basketball court, mini ampitheater, medical facilities, gym and administration building.

Migs Zubiri’s father is Bukidnon Governor Jose Ma. Zubiri, Jr. and his cousin is Malaybalay City Mayor Ignacio Zubiri. In the photo below, the mayor is the 6th one from the left (between Duterte and Kho) while the governor is the one in blue polo on the farthest right.

According to Senator Zubiri, the facility will cater to drug rehab and mental health care patients from Region 10 and even other parts of Mindanao.

“It’s the biggest and most beautiful of its kind in Mindanao and probably in the Philippines. A dream project that was made successful with the donation of the Friends of the Philippines Foundation for all the buildings, Malaybalay City Government’s Mayor Iñaki Zubiri for the Land and our office for all the coordination. This is Private and Public partnership at its best,” he said, adding that Bukidnon is an ideal place for a rehab because of its cool mountain air.

“Great example for Medical Tourism in the countryside,” he said.

* All photos here courtesy of Senator Migs, used with permission