“And there, in the same city where they met as girls, four New York women entered the next phase of their lives…dressed head to toe in love. And that’s the one label that never goes out of style.” – Carrie Bradshaw

Does this sound familiar? I actually used that in a previous blog post! Now, I’m using it again because this time, I just didn’t visit the apartment of Carrie Bradshaw, I got to tour other Sex and the City hotspots!

Hi and hello, fellow Sex and the City fans! Would you believe that our favorite SATC series is celebrating its 20th anniversary this year? Sex and the City first aired on June 6, 1998 — time flies so fast my, sadly, non-Manolo Blahnik shoes can’t keep up.

I can’t help but wonder — how many of you still watch old Sex and the City episodes? Can you still recite some of your favorite iconic lines from the series or can you still share your favorite scenes? Do you still shed a tear when you watch that infamous scene at the New York Public Library in the first Sex and the City film? Are you team Mr. Big or Team Aidan? I must admit, I still cry when I watch the first film and, yes, I think Aidan was a flirt in the second film but who cares when he looked THAT hot? Ok, I’m getting carried away…(see what I did there?)

Obviously, I’m still invested in SATC (LOL) even if the chances of a third film is now next to none. So when our friends from On Location Tours invited me to go on a Sex and the City Tour around New York, you could just imagine my excitement! A chance to relive those SATC moments! OF COURSE I would go! I said YES in a heartbeat! So, on a perfect summer Sunday, my aunt and I joined a fun Sex and the City Tour hotspots NY tour. Because it was summer, I had a good excuse to wear this ensemble: 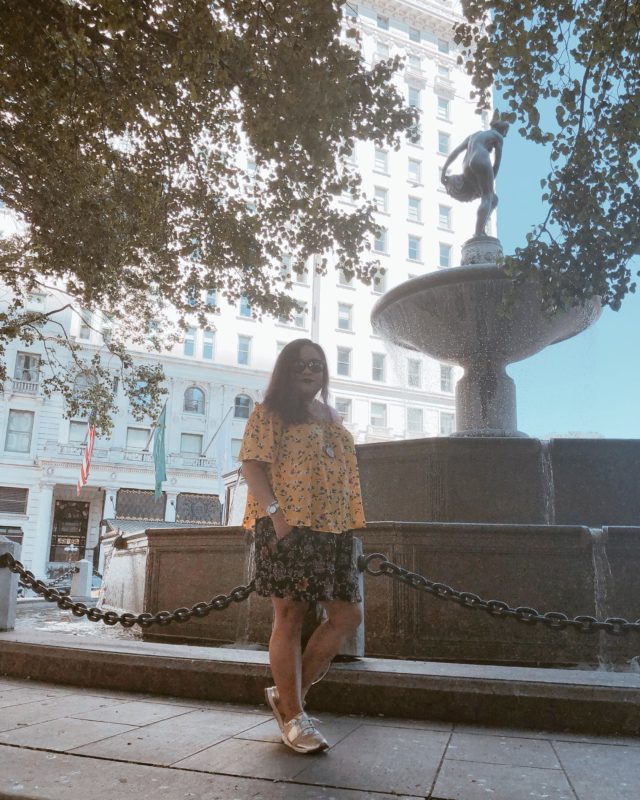 Took the train to Manhattan and joined a bus with several eager fans of the popular HBO series. The appointed meeting place was at the Pulitzer Fountain in front of The Plaza Hotel which, as we all know, was the spot where Sarah Jessica Parker’s character runs into Chris Noth’s character, Mr. Big, who happened to be hosting his engagement party to Natasha (UGHHH). It was also outside of the Plaza where Carrie asked him as to why he wouldn’t marry her (ouch).

The meeting spot was also a few feet away from the Paris theater and Bergdorf Goodman and just right along Fifth Avenue, famous for its shopping haunts — New York places that all have been a part of the TV series.

Our tour guide that day was Melissa. She was funny, (very) foul-mouthed and a self-proclaimed Sex and the City nerd. She even has a podcast that talks about SATC. All throughout the tour, she kept on dishing out SATC trivia (“What’s the name of Aidan’s dog?” I wanted to scream “Peteee”) including that one part during the intro of the series that I never noticed until that day! WHOA. Watch out for that.

The Sex and the City Hotspots Tour NYC was about 3 and a half hours long. We started at The Plaza, we ended near Times Square. Aboard an airconditioned bus, which was equipped with TV screens whereby clips from the series would be shown, we visited various neighborhoods – Midtown, Meatpacking District, West Village, Little Italy and SoHo.

We drove past about 40 locations including the Louis K. Meisel Gallery (trivia: this was where Kristin Davis’ character Charlotte supposedly worked. However, the actual gallery management kept on increasing their rental prices – as far as I remember their last rate was a whopping $30,000 – so the producers and writers thought that was getting insane and made Charlotte quit her gallery job), New York Public Library (Carrie was just supposed to return some books but found out that the library could be a wedding venue) and the Starbucks outlet where Carrie met Louise. By the way, you will receive a cupcake during the tour.

Meanwhile, among the actual pitstops were the Pleasure Chest (I can tell you what to expect there but that may lessen the fun so let’s skip it and just go in the store!), Buddakan (where Carrie and Mr. Big held their wedding rehearsal dinner), Onieal’s (which was “Scout” in the series, supposedly the bar owned by Steve and Aidan…this is also where you’re supposed to get your $10 ready for a cosmopolitan) and of course, Carrie Bradshaw’s apartment. I already visited that apartment with that all too familiar stoop earlier and shared some reminders.

My aunt and I waited for everyone to have their photos taken and leave before we took our sweet time and had our own photos taken at that familiar looking stoop.

Anyway, I made a quick Sex and the City tour vlog for you to see just how exciting and fun the tour was:

May I invite you to please subscribe to my YouTube channel? It will only take 2 seconds, I promise!

So is a Sex and the City Tour worth it? OF COURSE! And to inspire you to finally dive in and channel your inner Carrie, Miranda, Samantha or Charlotte, why don’t you Buy tickets for the Sex and the City Hotspots Tour in NYC here and use the promo code TakeTwo for a 10% discount off. In fact, when you book any tour with On Location Tours (and only through that link) and use the same promo code, you’re guaranteed a 10% discount 🙂

Enjoy the tour and let me know in the comments section how your experience was!